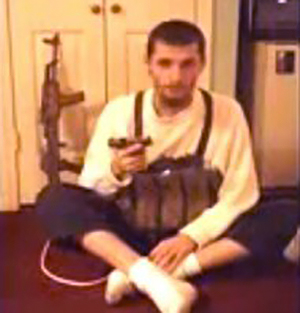 Osmakac was the target of an elaborately orchestrated FBI sting that involved a paid informant, FBI agents and support staff working on the setup for more than 3 months. The FBI provided all of the weapons seen in Osmakac’s faked martyrdom video, The Intercept reveals, posting online a classified video that was never to be seen by the public.

“The agents talk about the prosecutors’ eagerness for a “Hollywood ending” for their sting.”

Osmakac was 25 years old on January 7, 2012, when he filmed what the FBI and the U.S. Department of Justice would later call a “martyrdom video.” He was also broke and struggling with mental illness.

After recording this video in a rundown Days Inn in Tampa, Florida, Osmakac prepared to deliver what he thought was a car bomb to a popular Irish bar. According to the government, Osmakac was a dangerous, lone-wolf terrorist who would have bombed the Tampa bar, then headed to a local casino where he would have taken hostages, before finally detonating his suicide vest once police arrived.

Lilian Neg: Terrorism aimed at the Rich World stem from injustice and powerty