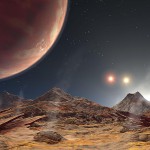 LA TIMES. Astronomers have discovered a giant planet with four suns just 125 light-years from Earth. The exoplanet is at least 10 times as big as Jupiter and scientists say it probably has no actual surface to stand on.

But, if you could fly a spacecraft into its atmosphere and look up, you would see one primary sun, a bright red dot, and another star shining more brightly than Venus does in our night sky.

If you pulled out a telescope, the smallest white star would be revealed to be a binary system of two stars.

Guardian: “Most Earth-like planet ever discovered could be a cosy home for alien life”