Hundreds of US Navy sailors on the supercarrier USS Ronald Reagan who sailed through the Fukushima radiation cloud have fallen ill in various cancer forms. The US government is hiding their medical histories and testimonies. A massive cover-up is reported in social media. Toru Bové comments and NewsVoice notes that no Swedish media is touching the US sailors’ legal case against Tepco suing the company on 1 billion dollars.

I have heard about this case when it hit the headlines. There wasn’t much detailed information in the early stage, but I expect it will reveal much more as it is a legal case from US sailors. This case can be a key for Japan.

Since the beginning, the Japanese people’s health issues with Fukushima were totally covered up and it was almost made invisible from the public eye. The government, medical industry and academic world have been working very close to downplay all health risks and the actual suffering and they keep denying a connection between Fukushima’s radiation and the people’s health in Japan.

For example, the government is down-playing the 100 children with pediatric thyroid cancer, which is a very well known disease related to radiation exposure. More than half of the children’s thyroids have already been taken out. They have to live on hormone drugs for rest of their time.

But before fighting with Japan government and TEPCO, which owns Fukushima, they were taken arms away from own government. It’s certainly a deja vu experience considering the US soldiers who suffered because of teh use of depleted uranium in the Iraq war.

I’m often asked by my new friends in Scandinavia:

“Why Japan again? You had Hiroshima and Nagasaki and must have learn’t a heavy lesson, why ?“

I have to sit down with them and talk about some real stories about Hiroshima and Nagasaki. Heavy stories. Within 10 days of the two US’s atomic bomb blasts which killed hundreds of thousands people instantly, Japan surrendered to the allies. Then, US came and set up an Atomic Bomb Casualty Commission (ABCC) in Hiroshima. They did a massive scale of research on the effects of the A-bombs. And US banned domestic doctors and academics to conduct any research for three years.

People in Hiroshima kept telling stories about how they hated ABCC as they were treated as guinea pigs. US captured all information available at the fields of A-bombs, and Japanese locals didn’t have any chance to “learn”. It was after 1945, the year Japan lost in a terrible war.

During the 1950:s in the Nevada test site in America, after US have learned a lot from Hiroshima-Nagasaki, US military made their own soldiers walk toward ground zero beneath the mushroom cloud. We still can find this shocking video on the internet. And we regard it as one of the countless crazy military experiments.

It is sad to know that today’s Department of Defense treat the USS Ronald Reagan’s crew in the same way. But to me, no surprise. 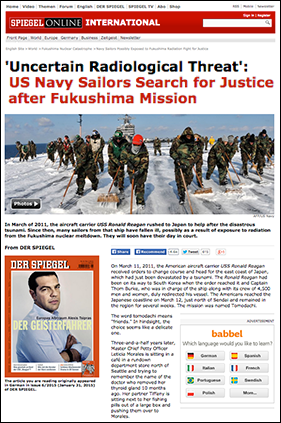 My heart goes to all soldiers who suffers. I’m anti-nuke and anti-war guy but I also have personal friends in the military. When I had my racing motorcycle tuning garages more than a decade ago, we had about 20-30 customers from the US Navy base. We had a lot of fun together. So I can relate my personal experience to this case in some part. I often visualize how hard it can be for each individual. Their whole lives taken away like this.

“They have testicular cancer, they have thyroid cancers, they have leukemias, they have rectal and gynecological bleeding, a host of problems that they did not have before … people are going blind, pilots who had perfect eyesight but now have tumors on the brain.” / Bonner, counsel for the plaintiffs

“U.S. Navy sailors have won a crucial battle in the U.S. District Court in San Diego against Tepco,” A. Cabral Bonner, counsel for the plaintiffs, said in a statement Wednesday. “The 200 young sailors claim that Tepco deliberately lied to the public and the U.S. Navy about the radiation levels at the Fukushima Dai­ichi nuclear power plant at the time the Japanese government was asking for help for victims of the March 11, 2011, earthquake and tsunami.” / “Tepco Can’t Escape Sailors’ $1B Fukushima Suit“, Law360

Today, we have a lot of issues and problems to dig out the truths about Fukushima. I totally discard any information from the Japan government and TEPCO. They are at the opposite side of transparency.

They recently revealed images from the first and second reactors where they captured muon particles from space. They admitted the nuclear fuel in those reactors now is gone. The news came out last week, then later, they said this research was done 8 months ago. This is the first time confirmation of melt downs since the accident. They knew it 8 months ago and they tell us now.

When it comes to the people’s suffering in Japan, we are having a very hard time to know the truth. I expect the USS sailors case will reveal some of most important information related to health issues concerning radiation exposure. And I hope it encourages Japanese people who suffers to raise their voices before it is too late.

The Guardian: Fukushima’s children at centre of debate over rates of thyroid cancer

The Guardian: US sailors prepare for fresh legal challenge over Fukushima radiation

I am quite sure its not hundreds who have fallen ill. The stories I have read conclude that maybe a handful off that ship are currently sick. One recently passed away. Although technically its less than 1% who are sick, how its being handled is truly obstruction of justice.

“Attorneys for the USS Reagan sailors hit by Fukushima radiation won big in court last week: Judge Janis Sammartino ruled that the $1 billion lawsuit against TEPCO for health damages and medical treatment CAN not only move forward, it adds as defendants General Electric, EBASCO, Toshiba and Hitachi – the companies that designed and built the Fukushima Daiichi nuclear reactors. Nuclear Hotseat talks with attorneys Paul Garner and Charles Bonner.”