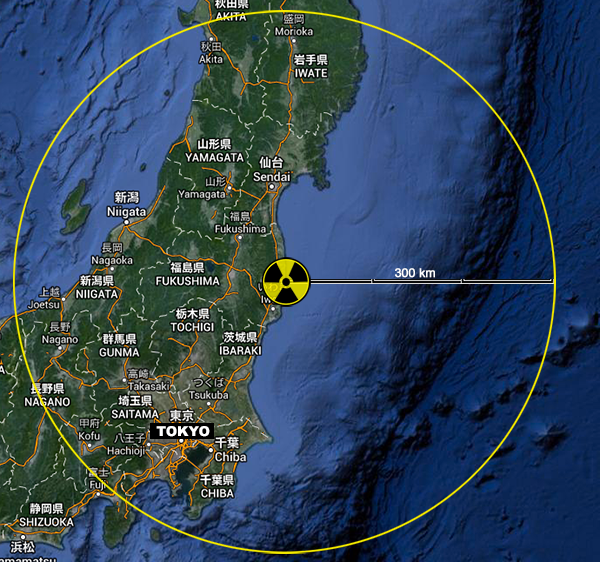 Within a 300 km zone from Fukushima there are about 50 million people, including the capital city Tokyo. When I speak to audiences about Fukushima I often start asking: “Do you know Fukushima is a lot worse than Chernobyl?”. People start to listen carefully. Then I introduce some key points. One of them is about dense populations.

If you draw a 300 km circle from Fukushima Daiichi Plant, where three reactors, one of them had MOX fuel, melted down. The zone covers an area with 50 million people including the capital city of Tokyo. Most of these 50 million people lives a western standard life. Just pose and think how big it is.

When Fukushima happened, I lived in Yokohama, city with a 3.5 million population, and my home was just outside of the 250 km zone. And it is situated in the south part of Tokyo metropolitan area which has a population of 38 million.

When I was part of a large Greenpeace campaign called “Tokyo Two”, I had a privilege to work with a number of great lawyers specialized in human rights issues. It wasn’t luck. Naturally, same people have been working on anti-nuclear cases where local residents fighting to close down nuclear plants.

As soon as we heard that something wrong was going on in Fukushima, I got an email from one of our lawyers. He basically said:

“Tsunami washed away Fukushima’s cooling system. There will be a melt-down situation soon. Don’t trust the government and mainstream media. Stay indoors and seek for information.”

It was an enough sign for us to react.? We stayed indoor and sought for information. It was very difficult in beginning, but soon we were able to find some information underground on the at internet.

After keeping children in house for five days, watching nuclear reactors exploding one after another on TV, we decided to leave home to go south. We witnessed two parallel worlds, one in which no one knew anything or didn’t care and another which made everyone freak out, on the way to reach Osaka bullet train station some 500 km from Tokyo. By strange coincident, I was interviewed by Swedish TV4 and it was aired.

Then, it didn’t take long to decide leaving my own country for good. Four months after the accident, my family and I moved to Sweden and never came back since. And never will.

By the time of the accident, we were a part of a young mother’s community with almost 300 mothers. All had one to three, four small children in age of one to five.
“Spice Club” was the name of the community we created. We used to organize events such as 28m sushi-roll making, sweet cooking party, 100 belly dancers on the beach etc.

Shortly after the accident, we and a number of friends started to feed information to those young mothers by email, information which they were never able to see on Japan’s mainstream media.

One of the factors the Japanese public struggled with was to find useful information due to the language barrier. Japan is big country with a 120 million population and most of the people don’t understand English and don’t have access to global media on a daily basis. So most people had to depend on only domestic mainstream media which was tightly controlled by government.

In my Greenpeace time, in June 2008, a day before we were arrested by national security police team, my colleague had to deal with a very aggressive interview request from a TV staffer. The man went mildly panicked and said:

“I have to get your interview now because you are going to get arrested tomorrow !”

It was clear that the police had leaked their plan. This single story may tell you how corrupted Japan media is.

For a month, we were able to find very useful information in some foreign media and on the internet. Some core information was hidden in very deep end of the internet. There was an invisible and constant battle between people who are telling us the truth and authorities who are telling us “everything is under control”. Link after link, we could find them, read them and passed them on to those young community mothers. Our motive was clear. Saving small children. To do this, we had to tell their mothers. 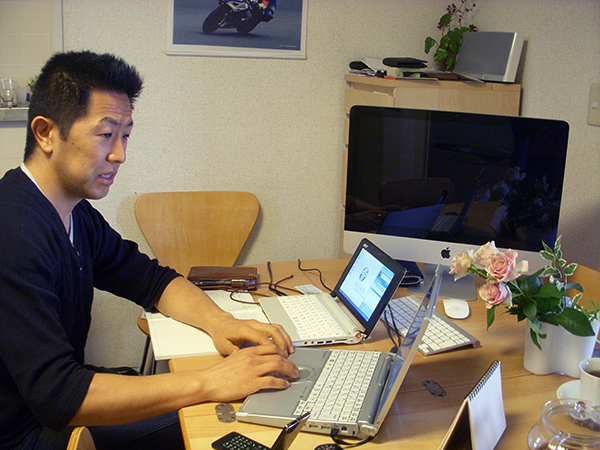 Mothers were worried, husbands were not

We succeeded in convincing at least a 100 mothers and children to temporary move to the south of Japan on the first week and some twelve months later. We learned that the second wave of radioactive plume reached our home area in the same time period. Did we make any difference on their lives ? Only time will tell.

Tokyo metropolitan area alone consists of a 38 million population and is the largest metropolitan economy in the world. No wonder, government and industries didn’t and don’t want to admit the Fukushima contamination around the area. And people are tied with jobs, homes, mortgages, schools and communities. I witnessed that families who took hard decisions like us and I witnessed families who decided to ignore the risks and decided to stay where they were. I witnessed that some families decided to split up. In most of the cases, mothers were worried, husbands were not. These were really tough things to see.

I have to admit that we lost this war. We couldn’t save as many as we wanted.
Japan’s foreign ministry spent a big budget to invite foreign media staffs, SNS key figures and bloggers to Japan. They enjoyed free trips including a nice hospitality and then expected to write nice about Japan. They have no idea of what they saw and ate.

If you by any chance read any articles, in any media, saying too nice things about Japan, especially claiming that “Fukushima is over and past”, be extremely careful. They may be people who enjoyed free trips and free lunches.