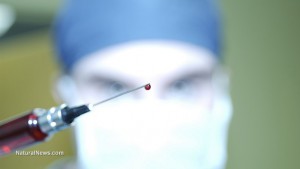 NaturalNews. It must have been shame that drove doctors at a California hospital to hide the body of an infant who had suddenly died after receiving eight simultaneous vaccinations. The parents were never allowed to see the body of their son before he was cremated.

Even after a year and four months had gone by, the official autopsy had not been revealed. Their son, Matthew, had been given DTaP, IPV, Hib, PCV, Hep B and Hep A in three shots, one in the right arm and two in the left leg, just a day before his sudden death [SIDS].

US panel backs trial for anthrax vaccine on children