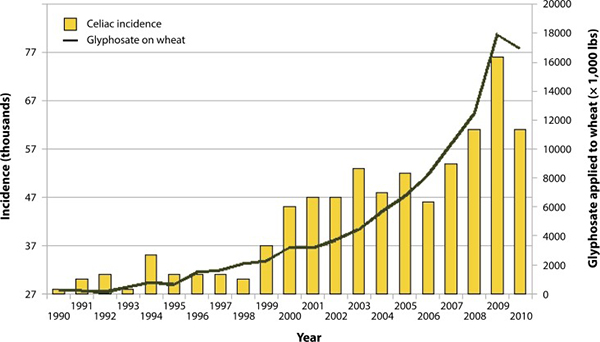 Celiac disease, and, more generally, gluten intolerance, is a growing problem worldwide, but especially in North America and Europe, where an estimated 5% of the population now suffers from it. Symptoms include nausea, diarrhea, skin rashes, macrocytic anemia and depression.

It is a multifactorial disease associated with numerous nutritional deficiencies as well as reproductive issues and increased risk to thyroid disease, kidney failure and cancer. Here, we propose that glyphosate, the active ingredient in the herbicide, Roundup(®), is the most important causal factor in this epidemic.

Characteristics of celiac disease point to impairment in many cytochrome P450 enzymes, which are involved with detoxifying environmental toxins, activating vitamin D3, catabolizing vitamin A, and maintaining bile acid production and sulfate supplies to the gut.

Glyphosate is known to inhibit cytochrome P450 enzymes. Deficiencies in iron, cobalt, molybdenum, copper and other rare metals associated with celiac disease can be attributed to glyphosate’s strong ability to chelate these elements. Deficiencies in tryptophan, tyrosine, methionine and selenomethionine associated with celiac disease match glyphosate’s known depletion of these amino acids.

Celiac disease patients have an increased risk to non-Hodgkin’s lymphoma, which has also been implicated in glyphosate exposure. Reproductive issues associated with celiac disease, such as infertility, miscarriages, and birth defects, can also be explained by glyphosate. Glyphosate residues in wheat and other crops are likely increasing recently due to the growing practice of crop desiccation just prior to the harvest.

We argue that the practice of “ripening” sugar cane with glyphosate may explain the recent surge in kidney failure among agricultural workers in Central America. We conclude with a plea to governments to reconsider policies regarding the safety of glyphosate residues in foods.

The elimination of foreign compounds (xenobiotics) such as drugs and toxins from the body is an essential process designed to protect against potential toxicity from the foods we eat. The food broken down in the stomach is absorbed by the small intestine and then ferried directly to the liver via the portal vein (see figure below). This allows the liver time to detoxify compounds before they are distributed through the circulatory system. In the liver, there are two main types of metabolism that deal with xenobiotics, and a third that deals with their transport..Glyfosat är eft gift som förstör kroppens ämnesomsättning. Det är verkligen into ok. Med vänliga hälsningar Kerstin Unger Salen