It took almost two months for us to decide leaving Japan for good. My wife and I had once thought about an idea of starting new life in Osaka, 500 km west from Tokyo but there was still some risk of new explosions at the site. We began to feel Osaka was still too close for our children’s safety so our next option was moving to Okinawa, south island 1,500 km from Tokyo. In weeks, we also had to drop this idea and decided to move to “outside” because we learned that we couldn’t trust food in the market anymore.

Right after the accident, Japan government started to encourage food companies to spread contaminated food all around the country and they used school meals to convince public. As soon as we heard this, we knew what was going to happen next.

The School meal business has been one of the biggest corruptions among other school related “businesses”. Prior to Fukushima, we witnessed one bad example. The dead stock whale meat which the industry had struggled to sell to the open market was found on plates of children’s school meal. Pro-whaling politicians abused their power to push it in. Same kind of process have made virtually un-checked contaminated foods to be served at public schools since 2011. 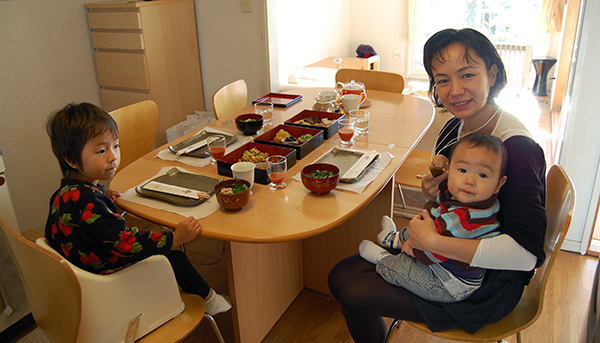 There were a massive propaganda on TV to convince consumers to eat food, fish, fruit, vegetables, from widespread contaminated areas. On one morning show a guy showed up on the TV screen every morning, he was eating and introducing the Fukushima food to the audience. I’m not sure what happened to him afterward really. What we heard was that he was hospitalized and diagnosed with acute leukemia six months later. This single event scared many people.

After we moved to the south of Japan on the sixth day after the accident, we only ate imported food except some fresh ones. We even used imported bottle water for cooking pasta and rice. We tried to buy fresh food from the south but it became harder and harder to feel safe. 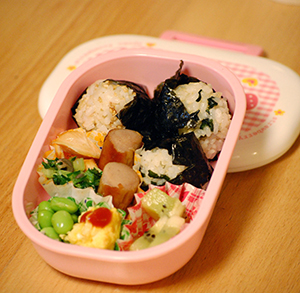 When we learned about the public school meal problem, we understood that schools were now in great danger. We were lucky and/or brave who could leave but mothers who had no choice to leave this crazy nation, have been facing problems with this issues for a long time. They decide to make their own lunch boxes with “supporsed-to-be-safe-food” for their children and had to deal with visible and invisible harassments from teachers and class mates. Japan’s society has a very small tolerance for “being different”. When government says it’s safe, everyone should eat and keep silent…

Though pro-nuclear people has been trying to make the public to only see “external exposure” and “cancer rates” instead of focusing on “internal exposure” and the “long list of general health risks and symptoms”, we had to be very careful about what to eat.

The food contamination problems with Fukushima is all depending on the peoples knowledge and core value for their own life. Like I mentioned before, if the person smoke and drink badly, doesn’t care about staying healthy, all these stories are meaningless. But I do believe these stories mean lot to many of you who like to live a better life.

I would like to share two stories. One is about my own experience and another one about a study by a scientist.

Years ago, I had a unique chance to learn one lesson. One expert have showed me a very good geiger counter and a contaminated sample. The device showed a very high radiation level and the person told me that this reading was telling us how much the sensor detects the amount of radiation from the sample. Most important thing to learn is that we don’t really know if it was from some low level of radioactive spreading over the sample or if it was from only a few very powerful particles on it. The sample was not anything you can eat, but I leaned the important lesson. It can happen to the food in the same way. That was a good enough lesson for me to form my personal policy against toxic radioactive particles. It is like this, “if anyone have to use a geiger counter, we better leave there” and “if anyone have to measure food, we better not eat anything there”. I kept these two “own rules” for four years now.

One grain of rice may contaminate a whole packet

A Japanese scientist Toshihiro Takatsuji studied contaminated rice harvested in Fukushima. He picked up rice which was test-grown near the plant and had a 357Bq/kg contamination. He soon found uneven contaminations within the sample so he conducted some screening tests. After that, he found a shocking result. One grain rice which weighs 0.02 g contained about half of the whole contamination in 18 g sample.

This particular grain of rice had 2.9 Bq and other samples of rice combined had almost the same amount.

Again, it tells us that we can’t be sure if the food is safe or not by just measuring some samples. Like we may find hot spots here and there as contamination is never even, we now find hot spots inside the food! It’s very easy for contaminated food to go through the “security net” unchecked to reach someone’s plate. We call this crazy situation the “Radioactive Russian Roulette”.

Both sides of people, pro-nuclear and anti-, often bring out their measurement results on food. But very few people can tell which part of the food contains most of the contamination. They often measure 200g-1.0kg test samples and that’s it. In most of cases, they have to spend hours and hours with very expensive measurement system. And we heard many cases of manipulations by mixing contaminated food with cleaner ones, to lower number of results.

Today, Fukushima uses “newly invented measurement system” to check radiation of “all shipped rice” by spending 10 seconds on each bag and they proudly announce their rice is now safe to eat.

We hear a number of comments from local farmers, saying “we grow them because we need to stay in business, but we don’t eat them and we don’t let our family each them. 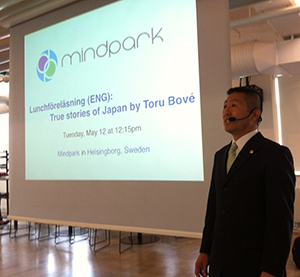 Another issue is the so-called “threshold theory” that “there is certain level of radiation people can cope with”. Threshold theory is very convenient for the nuclear industry to stay in business and the general industry to maximize profits in this chaos situation with Fukushima. But it is just nonsense theory to anyone who doesn’t want to risk her or his own life.

While Japan government has been trying to convince public that the radioactive contamination of food is almost nothing to worry about, we have been learning so much with the real risks that we faced. There are many people who don’t believe “threshold theory” and they are trying to avoid any suspected food.

As MD Hisako Sakiyama, the former chief of the National Institute of Radiological Sciences, states:

“Threshold theory is nothing to do with medical point of view, it only comes by political decision”.

Since Fukushima happened, many good people in food industry have been facing a tough reality.

Only two weeks after the accident, a local farmer committed suicide after learning what happened on his soil. A number of organic food restaurants had to decide to move or close. Neighbouring countries are banning importing Japanese foods. Local farmers who wanted to “rest” their farmland to lower contamination were harassed by the local government. Cattle famers were forced to release their cows which later died miserably.

Thanks for sharing! Here is an interesting link with information of the benefits of Miso when it comes to protection to radiation; http://www.naturalnews.com/049769_miso_radioprotective_effects_Hiroshima_survivors.html.