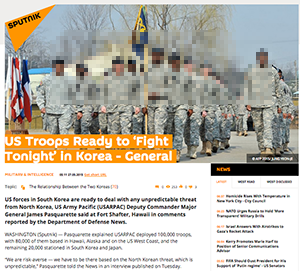 US forces in South Korea are ready to deal with any unpredictable threat from North Korea, US Army Pacific (USARPAC) Deputy Commander Major General James Pasquarette said at Fort Shafter, Hawaii in comments reported by the Department of Defense News, Sputnik News reports.

WASHINGTON (Sputnik) — Pasquarette explained USARPAC deployed 100,000 troops, with 80,000 of them based in Hawaii, Alaska and on the US West Coast, and the remaining 20,000 stationed in South Korea and Japan.