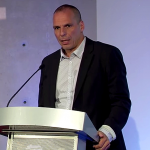 “In his first interview since resigning, Greece’s former Finance Minister says the Eurogroup is “completely and utterly” controlled by Germany, Greece was “set up” and last week’s referendum was wasted”, NewStatesman writes.

“Greece has finally reached an agreement with its creditors. The specifics have not yet been published, but it is clear that the deal signed is more punitive and demanding than the one that its government has spent the past five months desperately trying to resist.”

“The sense of crisis had been heightened by Prime Minister Alexis Tsipras claiming the bailout he negotiated on Greece’s behalf was a deal he did “not believe in”.”