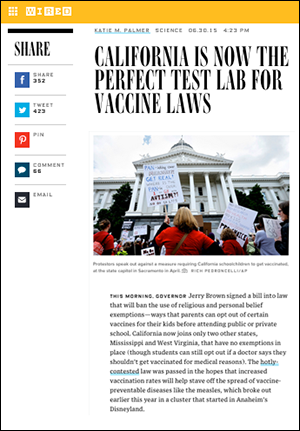 Governor Jerry Brown signed [June 30, 2015] a bill into law that will ban the use of religious and personal belief exemptions—ways that parents can opt out of certain vaccines for their kids before attending public or private school, Wired writes.

“California now joins only two other states, Mississippi and West Virginia, that have no exemptions in place (though students can still opt out if a doctor says they shouldn’t get vaccinated for medical reasons). The hotly-contested law was passed in the hopes that increased vaccination rates will help stave off the spread of vaccine-preventable diseases like the measles, which broke out earlier this year in a cluster that started in Anaheim’s Disneyland.”