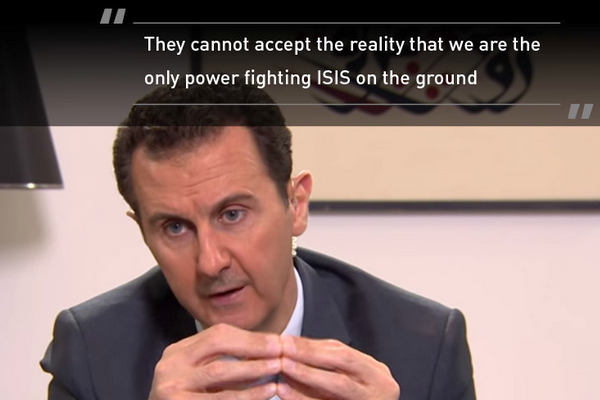 “It was the Iraq war in 2003, when the United States invaded Iraq. We were strongly opposed to that invasion, because we knew that things were moving in the direction of dividing societies and creating unrest. And we are Iraq’s neighbors.”

“There are forces fighting terrorism now alongside the Syrian state, which had previously fought against the Syrian state. We have made progress in this regard, but I would like to take this opportunity to call on all forces to unite against terrorism, because it is the way to achieve the political objectives which we, as Syrians, want through dialogue and political action.”

“We have no veto [on partnership] on any country provided that it has the will to fight terrorism and not as they are doing in what is called “the international coalition” led by the United States. In fact, since this coalition started to operate, ISIS has been expanding. In other words, the coalition has failed and has no real impact on the ground.”

“If you are worried about [refugees], stop supporting terrorists. That’s what we think regarding the crisis. This is the core of the whole issue of refugees.”

“Western propaganda has, from the very beginning, been about the cause of the problem being the president. Why? Because they want to portray the whole problem in Syria lies in one individual.”