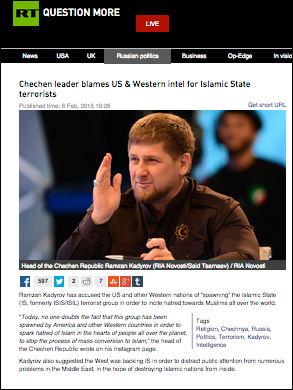 ”Prior to this the Chechen leader had told reporters that he possessed information that the IS leader, Abu Bakr al-Baghdadi, had been recruited to work for the US personally by General David Petraeus, the former director of the CIA, and former commander of coalition forces in Iraq and Afghanistan.”

”Kadyrov also suggested the West was backing IS in order to distract public attention from numerous problems in the Middle East, in the hope of destroying Islamic nations from inside.” 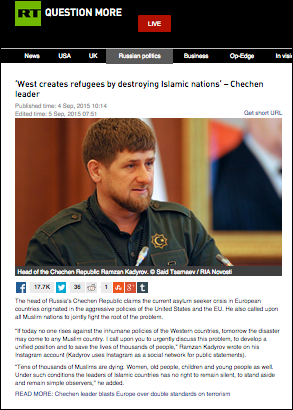 ”The head of Russia’s Chechen Republic claims the current asylum seeker crisis in European countries originated in the aggressive policies of the United States and the EU. He also called upon all Muslim nations to jointly fight the root of the problem.”

”Europe and the USA are not simply refusing to act, they instigate the tragedies of millions of people by destroying the economy of Islamic countries and starting wars in Muslim regions of the world, he added.” 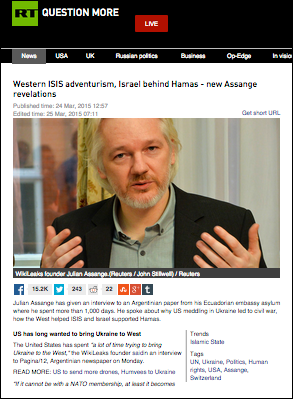 ”Julian Assange has given an interview to an Argentinian paper from his Ecuadorian embassy asylum where he spent more than 1,000 days. He spoke about why US meddling in Ukraine led to civil war, how the West helped ISIS and Israel supported Hamas”.”

”Meddling of Western countries in the Middle East led to creation of the Islamic State (IS, formerly ISIS), an Islamist group that is currently gaining a massive following across the wider Middle East and Africa, Assange said.”

“The IS is a direct result of the adventurism of the West, Assange said.” 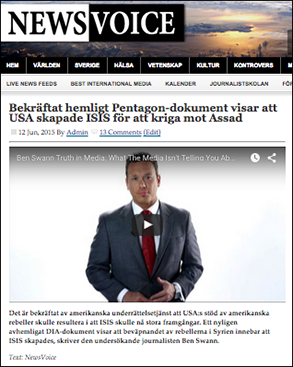 ”A newly declassified DIA document from 2012 confirms that arming the anti-Assad rebel forces and Islamist groups would lead to the emergence of ISIS.”

InfoWars: ISIS and the manufactured terror paradigm is designed to steal your rights 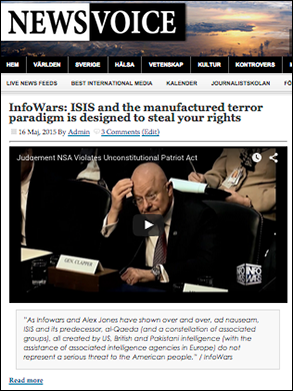 ”As Infowars and Alex Jones have shown over and over, ad nauseam, ISIS and its predecessor, al-Qaeda (and a constellation of associated groups), all created by US, British and Pakistani intelligence (with the assistance of associated intelligence agencies in Europe) do not represent a serious threat to the American people.”

”Since 9/11 the terror threat hyped by the federal government and its burgeoning antiterror apparatus has demonstrated itself to be, at best, cartoonish. The FBI continues to transparently roll out groomed patsies and mental deficients as lone wolves and homegrown terrorists.”

Startling revelations: IS operative confesses to getting funds via US 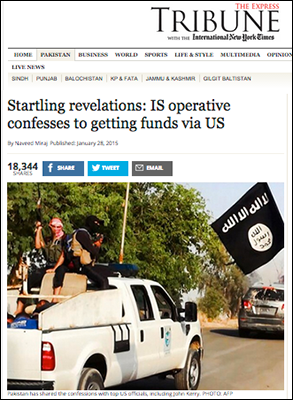 ”Yousaf al Salafi – allegedly the Pakistan commander of Islamic State (IS) or Daish – has confessed during investigations that he has been receiving funds through the United States.”