RT.com: While the International Criminal Court investigates and sentences African dictators, any of the crimes the US commits like the invasion of Iraq, which has destabilized an entire region, go unpunished, philosopher Noam Chomsky tells RT.

Noam Chomsky about US interventions

“That’s kind of as if, in 1943, the Nazi press had criticized England because it was destabilizing Europe for supporting partisans who were killing German soldiers. In other words, the assumption is, when the United States invades, it kills a couple hundred thousand people, destroys the country, elicits sectarian conflicts that are now tearing Iraq and the region apart, that’s stabilization. If someone resists that tact, that’s destabilization.”

Russia Today: Our network has come repeatedly under attack, even from State secretary John Kerry. Recently, he said, “RT’s influence is growing,” while his very own deputy, Victoria Nuland, said that nobody watches RT in America, which is probably not true. Do you think this is about money? Because we know that the BBG — the Broadcasting Board of Governors — has a budget of $750 million as opposed to RT’s $250 million, which has never been a secret. Or is it something else?

Noam Chomsky: I think it’s something else. I don’t think they care about the money. The idea that there should be a network reaching people which does not repeat the US propaganda system is intolerable. 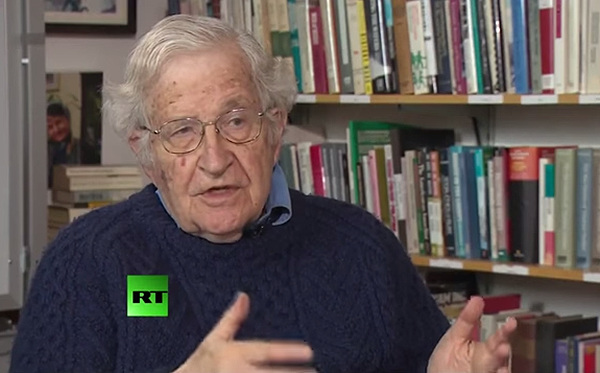