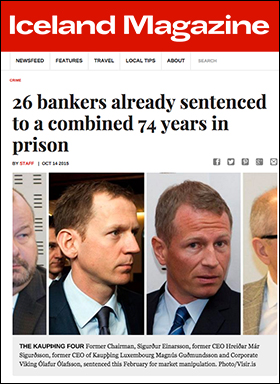 Iceland sentenced 26 top bankers to a combined 74 years in prison for their involvement in the 2008 bank crisis. Most of those convicted have been sentenced to prison terms of two to five years, as reported by The Iceland Magazine.

“In two separate rulings last week, the Supreme Court of Iceland and the Reykjavík District Court sentenced three top managers of Landsbankinn and two top managers of Kaupþing, along with one prominent investor, to prison for crimes committed in the lead-up to the financial collapse of 2008. With these rulings the number of bankers and financiers who have been sentenced to prison for crimes relating to the financial collapse has reached 26, and a combined prison time of 74 years.”

Dead JP Morgan bankers “Knew each other and had uncovered something”

All Wars Are Bankers’ Wars

Iceland – An extraordinary democratic example of solving a crises

2 to 5 years, thats a Joke . Common it should be 20-50 years, now they Will come out and have there money on there fukin swiss accounts on CaymanIslands

No man is an Island?