“This might sound kind of random, but I would really like to ask your opinion of why you think there’s this preoccupation with the apocolypse and with zombies right now in our culture.” 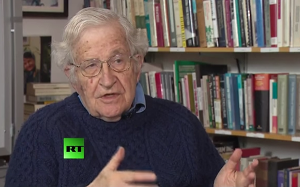 “I’ve never seen a real study, but my guess is that it’s a reflection of fear and desperation. It’s a very frightened country. The United States is an unusually frightened country. And in such circumstances, people concoct either for escape or maybe out of relief, fears that terrible things happen.

Actually, the fear of the United States is a pretty interesting cultural phenomenon. It actually goes back to the colonies. There are some good studies out there. A very interesting book by a literary critic, Bruce Franklin. It’s called War Stars. You might want to take a look at it. It’s a study of popular literature, the kind of literature that most people read from the earliest days to the present. When it gets to the present it switches to television, things like that. Just kind of popular culture.

There are a couple of themes that run through it that are pretty striking. For one thing, one major theme in popular literature is that we are about to face destruction from some terrible, awesome enemy. And at the last minute we are saved by a superhero or a super weapon, or in recent years high school kids going to the hills to chase away the Russians, things like that. That’s one theme that runs through constantly. And there’s a sub-theme. It turns out this enemy, this horrible enemy that’s about to destroy us, is somebody we’re crushing.

So you go back to the early years, the terrible enemy was the Indians, who were going to destroy us. The colonists were, of course, invaders. They were invading the continent. Whatever you think about the Indians, they were defending their own territory. There’s a scene in the Declaration of Independence, people read it every July 4th, but not many people pay attention to what they’re reading. It’s kind of like a prayer book, you move on somewhere else. But if you read it and pay attention, there are some pretty remarkable passages. So one passage is a list of a bill of indictment against King George the Third of England explaining why the colonists were revolting. One of them is “He unleashed against us the merciless Indian savages, whose known way of warfare is torture and destruction” and so on. Well, Thomas Jefferson, who wrote that and is a very great thinker of the Enlightenment, knew perfectly well that it was the merciless English savages whose known way of warfare was destruction and murder and were taking over the country and driving out or exterminating the natives. But it’s switched in the Declaration of Independence and nobody comments on it for years. That’s another sign of the same concern.

After that it became the slaves. There was going to be a slave revolt, a terrible slave revolt, and the slave population, the black population was going to rise up and kill all the men, rape all the women, destroy the country, something like that. Then it goes on through the centuries. It becomes modern times, Hispanic narco-traffickers are going to come in and destroy the society. One thing after another. And these are real fears.

That’s a lot of what lies behind the extremely unusual gun culture in the United States. It’s quite unique. Homicides, deaths by guns in the United States are way outside—there’s a kind of hysteria about having guns. A large part of the population believes they just have to have them to protect themselves. From who? From the United Nations. Or from the federal government. From aliens. Maybe from zombies. Whoever it is. We just have to have guns to protect ourselves. That’s not known elsewhere in the world. Maybe in, say, Syria, a country that’s warring you might find something like that. But in a country that’s not only at peace but has an unusual security and a great degree of freedom, that’s quite remarkable.

I suspect that what you’re bringing up is part of that. I think it’s, much of it is kind of just a recognition, at some level of the psyche, that if you’ve got your boot on somebody’s neck, there’s something wrong. And that the people you’re oppressing may rise up and defend themselves, and then you’re in trouble. And another is strange properties the country has always had of fear of invented dangers. There is a kind of paranoid streak in the culture that’s pretty unusual.”

History Today: America and the Americas – The Politics of Paranoia

Nation: The Most Exceptional Thing About America Is Our Paranoia