How substantial is the Swedish collaboration with the U.S. military in the development and operational use of civilians-killer drones and why are Swedish young computer gamers recruited to be drone pilots? These sensitive questions have been touched upon in NewsVoice before. Now professor Marcello Ferrada de Noli addresses the subject and there seem to be indications that Sweden is highly involved in both ways.

A recent interview with Tonje Hessen Schei, the director of the new documentary film “Drone”, a film that treats the issue of the recruiting of gamers by U.S: military, indicates that Swedish gamers have been recruited together with German and Norwegian ones. These are the words of Tonje Hessen Schei:

“The gamers have been incredibly important for the U.S. military, and they have been targeting gamers in their recruiting strategies for the last decade. And this has been very successful, and it is now also spreading around the world. It is done in Germany and in Sweden and also in Norway.”
The interview was published in Democracy Now. [1]

The above raises the issue on whether it is ethically defendable, or legally, that citizens of a nation not forming part of NATO, can sign for working for the US military within the endeavour of drone operational development. Drones, used by the US in multiple war or counterinsurgency scenarios, have reclaim over four thousand casualties among civilians, including the killing of nearly 300 children.

Swedish Doctors for Human Rights has denounced the increasing killing of civil victims around drone strikes. In this coverage: “Civil casualties caused by drone strikes. An injury-epidemiology & human rights report”, [2] which also comprised Afghan victims, we based our analysis on statistics of drone attacks ordered directly by the U.S., inclusive NATO-led operations.

Equally astonishing, are the revelations that in the decisions of drone-killings in Afghanistan have allegedly participated Swedish military officers – now revealed in reports published in the New York Times, “Germany and Sweden Are Said to Help Make Afghan Kill Decisions”. [3]

These serious accusations were drawn to our attention by an account published by Sven Ruin in “Record number of asylum-seekers from Afghanistan”. [4] As known, Sweden as a country IS NOT a member of NATO, still has a stance as non-aligned country, and the Swedish military officials participating in the NATO-led expeditions should be aware of the illegitimacy of a collaboration that would go beyond established rules – what the Swedish people has determined.

In this context, new revelations show that The US military have been successful in recruiting Swedish gamers for their war.

The above allegations in the New York Times have three main repercussions:

1. On the one hand it would demonstrate that the involvement of the Swedish military with NATO has been done at a more advanced development than the one recognized by the Swedish authorities. Sweden has subsequently denied this participation, but on the other hand there is an unfortunate record of collaboration by Swedish officials with their US and NATO counterparts, and which have been conduced in secrecy, illegally, and even behind the back of the Swedish Parliament. [5]

Episodes of such behaviour were known in Sweden thanks to exposures done by Julian Assange’s organization WikiLeaks. Swedish authorities, including the Parliament, did not however take any sanction against the responsible officials. After the state-owned Swedish TV publicly accused Assange of being “Sweden’s enemy”, several authors have suggested that the WikiLeaks revelations were in the background of the protracted case against Mr Assange – with the aim of hampering the WikiLeaks endeavour.

2. The second important repercussion has to do with the actual campaign in Sweden from the part of the military and the right-wing political parties (with the exception of Sweden democrats), which lobby for a Swedish membership to NATO:

The collaboration of Swedish military in the terms now denounced by the New York Times, would instead be serving as another faites accomplis argument, of the kind used recently, for instance by Professor Wilhelm Agrell and other scholars. Meaning that, (our phrasing) “if the collaboration by Sweden towards NATO has been exercised any way at such deep level, and since long, then why not to acknowledge a full NATO participation”; which would be one of the conclusions to be inferred from professor Agrell’s opinion in DN debatt, ”Sweden should apply to NATO-membership together with Finland” [In Swedish]”. [6]

Faites accomplis is not a god argument; particularly here, because it does not analyse the facts such collaboration has consisted of. Neither it evaluates those collaborations from a geopolitical perspective in Sweden’s interest, nor examines whether they had a legal ground. The ostensible anomie in which these surreptitious collaborations have occurred, also have step by step cemented the false notion that “we are a part of NATO”. In true, episodes such as the secret agreements between Swedish government officials and NATO Intelligence agencies for the transferring of personal information of Swedish citizens, not only are alien to the official neutrality/non-alignment stance – but also they are bluntly illegal.

Repetition of a same mistaken behaviour will not make that behaviour right; likewise the reiteration of an illegal collaboration cannot be the ground for a legislating on behalf of a NATO-membership.

3. A third repercussion has directly to do with the current human rights campaigning by the Swedish government in the international forum – most recent illustrated by the appearances at the UN forum of PM Stefan Löfven on issues of human rights and gender equality, ditto of FM Margot Wallström, on sustainability of UNRWA [7] in regards to refugees. In a recent retweet by the Swedish Minister of Foreign Affairs is read the following message by the European Parliament President:

It is just fine that Sweden is being presented as a human rights champion in the management of the emergent migration flow, which includes migrants from Afghanistan. Nevertheless, our analysis of Sven Ruin’s data [See graphic below] [8] on the dramatic increasing of refugees from Afghanistan in recent years shows that this phenomenon has a correlation with the worsening of the human rights situation in the country, including episodes of aerial attacks on the population. 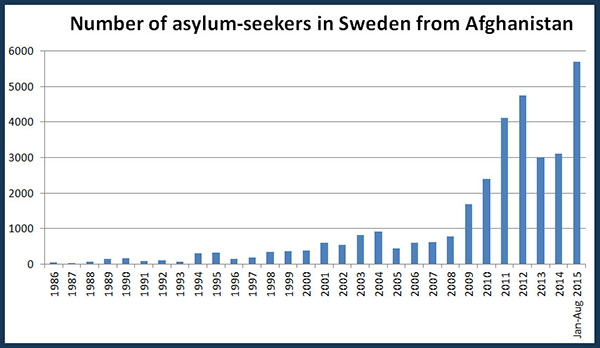 Graphic above by Sven Ruin

If in decisions of these attacks the involvement of Swedish military has been as reported in the New York Times, then Sweden would nominally have a direct responsibility in the causes that led to the migration crisis; a situation which now Swedish authorities summon the Swedish people to deal with.

The allegations above should be clarified beyond the simple denial by the military authorities. They should be analysed in the context of the NATO-membership that the same authorities seem to favour, and against the backdrop of human rights violations and international reports on the perpetration of war-crimes against the population of Afghanistan. 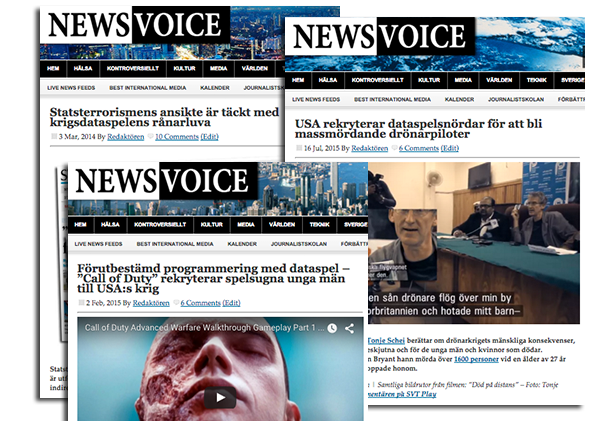 [6] Wilhelm Agrell, Sweden should apply to NATO-membership together with Finland, DN, 13 Sept 2015

[8] Sven Ruin, Record number of asylum-seekers from Afghanistan. Accoun.org, 1/10 2015, and personal communication from the author (1/10 2015) indicating the following sources for the data in graphic above: 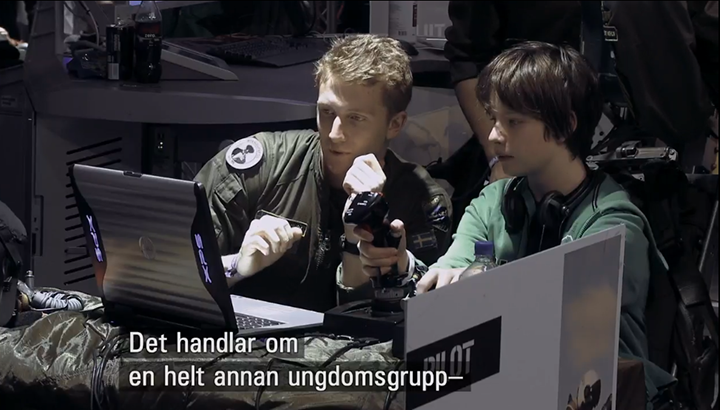 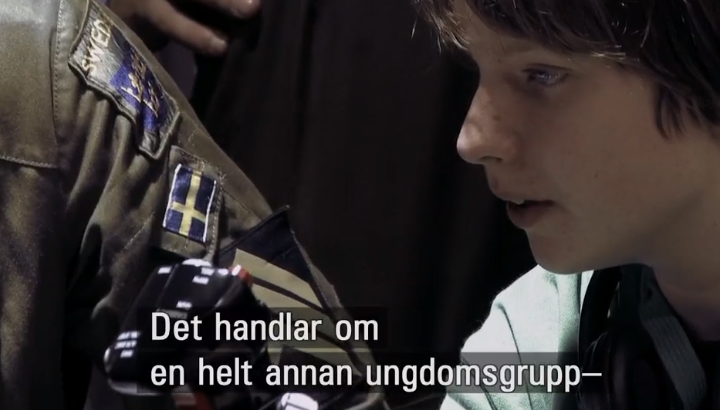