When terrorists are asked about their driving forces it becomes evident that many terrorists have a very clear purpose in spreading terror. They want to make it clear that they no longer accept the Western destructive interferences in their countries. They are tired of being preyed upon and being at the bottom of the society. They are fed up with imperialism and also their own corrupt governments. 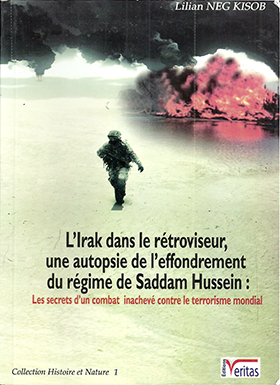 Lilian Neg (1979-) who has a master degree in international law is a writer and analyst who recently came out with a book about the Iraqi war and the emerging terrorism in the Middle East and Africa. She base her suggestions for solutions in humanitarian work and development plans for the poor countries. She points to the United Nations and their development work for sustainable growth of sovereign countries.

Lilian Neg says the African continent is a very rich region and if properly managed people are going to move there instead of fleeing Africa for Europe. But this demands work for many years and one starting point could be to better understand the true origins of terrorism.

However to approach terrorists is difficult and dangerous but when successful the answers points back to the Westerns world and the rich countries of the North. We must be aware of how the rich people of the world co-created both terrorism and refugees en masse.

But when the Western media alone is portraying the terrorists it’s all about spreading terror and destroying our Western values. It’s too simplified. Their message is not known. We co-created them.

The interview was recorded in Bamenda, Cameroon, december 16, 2015

Contact Lillian Neg here: Facebook.com or by mail:    for book and lecture inquiries

George Weah – The soccer player who became president of Liberia

Cameroon wars – President should let the people decide their future

Follow the money!
The biggest criminal power in the world has financed the terror.
Read the religious texts they use to indoctrinate the mentally weak!
Take a deeper look at the tactics!
fm3-05-130.pdf

“I met a lot of terrorits. I interviewed them for books. I never met one that wanted to be a terrorist. They are desperate people. If we want to get rid of terrorism we must get rid of the root causes, that cancer that is destroying the whole system.”

Afrika was raped by western countries in decades. Many people dont´t realize that their fortune is build on others misfortune. China tries to give african countries fair deals but mostly western intelligens interfere with terroist threats and real ones and pay korrupt politicians. The metod John Perkins is telling is not only working in South America.

Inspiring and well done. A valuable voice. Why do we not hear more of the same in western MSM? Would that destroy the narrative and our self perception?