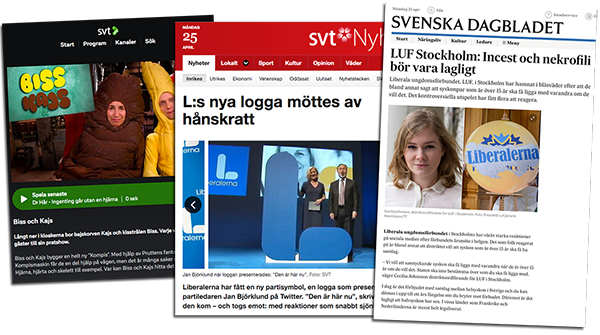 SWEDEN. The Swedish political party The Liberals last weekend showed off it’s new logo that resembles something quite “erect” according to several Swedish media outlets. The news follows an event in February when The Liberal Youth of Sweden came to the conclusion that necrophilia should be legalized in Sweden.

The new logo has caused scorn and laughter among Swedish citizens and politicians, but also other feelings. The member of Parliament Birgitta Ohlsson bursted out:

“I fell with a splash first time I saw it…”, according to SVT.

Others described the logo with somewhat aroused comments such as: 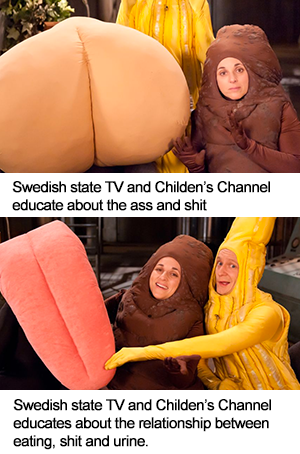 However this is not the first time Swedish liberalism has drawn international attention. In 2013 the Swedish (former) foreign minister Carl Bildt said a Russian TV channel, that warned the parents of Ukraine to let their children watch “Biss och Kajs”, has lost it.

So what does “Biss och Kajs” mean? It’s a rewrite of the words “kiss och bajs” which in Swedish literally means urine and poo. Yes I am sorry, kiss equals urine here. The show “Biss och Kajs” is a part of the Swedish government’s childrens’ TV channel “Barnkanalen” that focuses on urine, poo and the ase. What exactly is taught here? Answer: All Things Are Natural. In Sweden the government educates children about these naturals because the parents can not, it seems.

The government-owned SVT (Swedish Television) which is a counterpart to RT (Russia Today) claimed that it is just Russian propaganda when Dmitry Kiselyov, who is head of the Russian government-owned news agency Rossiya Segodnya, scornfully commented on “Biss och Kajs”.

But this year Sweden really lost it. In February the Liberal Youth of Sweden during the annual meeting came to the conclusion that necrophilia and also incest should be legalized in Sweden. When the chairwoman of  the Liberal Youth was asked about the specifics surrounding the arrangement of having sex with corpses, she had no answer.

The press officer of the mother party The Liberals said that they do not support these proposals and that the use of dead bodies, necrophilia as well as incest should remain illegal.

It’s important to add that cannibalism is prohibited in Sweden as well as bestiality. So don’t get any ideas. Bestiality was prohibited in Sweden on the first of April 2014, Swedish Government television (SVT) announced on March 27, 2014 but according to sources it was not uncommon that foreigners travelled to Sweden to have sex with animals before April 2014.

However the proposal to legalize necrophilia and incest may come as a promising eventuality for deranged foreign tourists.

Resumé: Vad gör du om din nya logotyp visar sig likna en…? (What do you do if your new logo looks like a…)