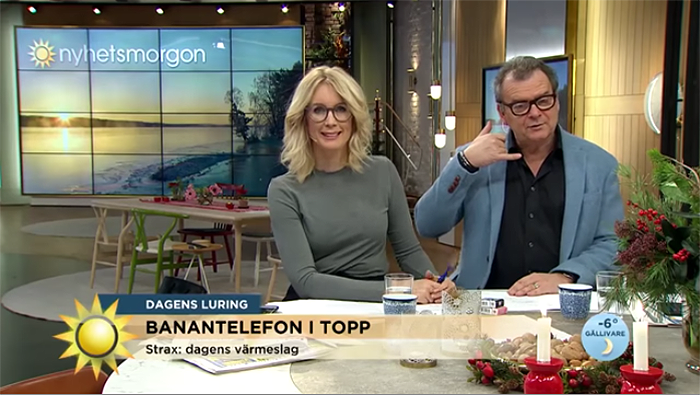 HUMOR. The Swedish morning news show “Nyhetsmorgon” (Newsmorning) on the channel TV4 totally bought the funny fake news report from The Onion claiming that “bananas remain the overwhelming fruit of choice among individuals pretending to receive a telephone call”.

The Swedish newspaper Resumé was the first media outlet to pick up the the fake news about the fake study. Resumé notes that TV4 Newsmorning was given the defaming decoration called “Bewilder of the Year 2014” by the The Swedish Skeptics Association motivating the anti decoration claiming that TV4 Newsmorning has disseminated pseudo science news about medicine and health.

However The Swedish Skeptics Association is regarded to be controversial itself and has been nominated for the same decoration several times by the public.

NewsVoice gave the decoration “Bewilder of the Year” to the The Swedish Skeptics Association in 2011 due to the association’s not so scientific outlook. Rather the skeptics work to defame those with ideas and thoughts not aligned with their particular world view, we recon.

“Ape-like”? Must say apes are both more intellectual, reflective and focused in their judgement than these skeptics.