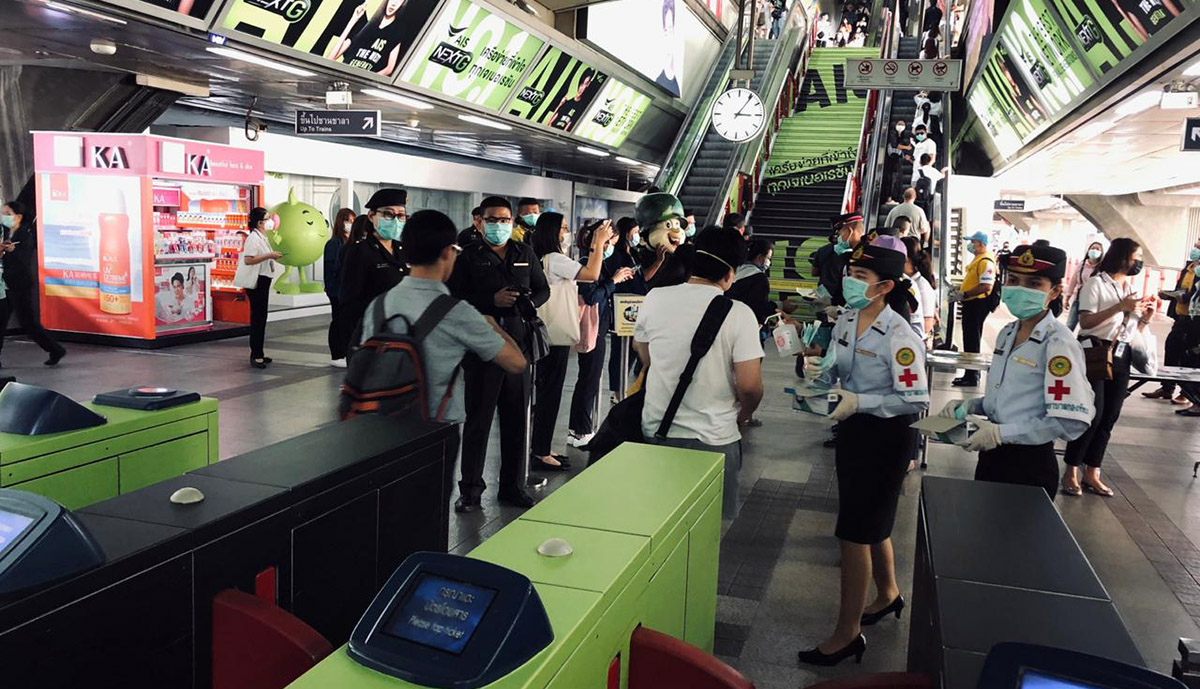 CORONAVIRUS. China has been hit by coronavirus as if by a brick over the head; heavily and mercilessly. Instead of help, Beijing has received criticism, even verbal attacks. In spite of doing tremendous job fighting the epidemy, China is getting almost no tributes for its performance.

Now Bangkok, Jakarta and other regional capital are in panic. After trying to sweep the crises under the carpet in order not to rock their tourist industries which are heavily dependent on annual arrival of the millions of Chinese package tourists, they are trying to introduce coherent health measures. A bit too late, complain their own citizens.  However, the West has no appetite to criticize them. All criticism is reserved, as always, for China.

No one knows precisely where the present disease really comes from. Chinese doctors (as well as the Russian ones) are working days and nights, trying to find the answers, as well as the cure. But until now, people are still dying.  The mortality rate of the infected patients is very high; some sources say at about 50%. As this article is being written, around 210 have already lost their lives, mainly in China.

In 2013, The Guardian wrote that there were similar cases in Saudi Arabia, where the research was brutally swept under the carpet:

“A doctor in a Saudi hospital was fired for reporting a new, deadly strain of the coronavirus. Now, with half of all confirmed cases ending in death, the World Health Organization has issued a global alert and scientists are preparing for the worst…”

This example exposes an approach so commonly adopted by different nations. In many countries, similar emergencies are not confronted directly. The governments hope that they will, quietly, go away, until it is often too late to prevent disaster.

My doctor friends in Hong Kong commented on the above-mentioned case:

“That was MERS, and MERS is a corona virus, and so is a common cold. The present virus has not got a name yet, but belongs to the corona virus family, too.”

China has risen, with zeal and determination. It is confronting deadly disease frontally, as if it would be confronting enemy military battalions. It has been clearly a Communist approach, similar to that which already saved millions of lives in Cuba.

From Szechuan and elsewhere, I began receiving brief but powerful messages, penned by my friends and colleagues; messages reflecting heroic struggle of Chinese nation against the disease:

“China is now introducing the highest level of emergency. Treatment and prevention are the most important political missions.”

“Nobody can now neglect his or her duties… In my city’s education department, they issued an order to postpone school opening day.”

“A factory in Zhejiang province was told to produce 80 million masks in just a few days. In the same time, the government ordered factories and shops not to raise the price of the masks. It also allocated billions of RMBs for preventive measures and products, including paying for trucks and trains distributing the equipment.”

“Patients infected with this virus get free medical care.”

A young Chinese diplomat, a friend of mine whom I will only identify by her first name – Langqi – here, reported to me from her hometown in Northern China, near Beijing:

“Despite the ineffective response of the Wuhan government at the initial stage, all governments, from central to local, have been doing everything they can to contain the spread of the virus. It is not an easy task, considering the “biggest human migration” happening during the Chinese New Year. It is with immense commitment and voluntary contributions, from doctors, nurses, people working in service and delivery industry, as well as from Wuhan people themselves, that China is able to manage the spread of the virus to its current situation.

The responsive measures are also largely backed up by experts, including those who contributed during the SARS epidemic. It can be said that the whole country now is working as a whole to face our common challenge: the coronavirus. The solidarity comes not only from the trust in the government, but also from the identity as part of the community.”

A doctor with whom I work in Hong Kong, re-confirmed, in summary:

“In Wuhan, some officials tried to hide the information at the beginning. But the higher authorities made everything clear and the world appreciates government’s work, afterwards.”

Not all do, of course; unfortunately, not all.

Attacking China (as well as Russia, Iran and other independent nations) is now a sport, or a well-paid profession, or both, for many individuals, particularly those living in the West.

But many people, particularly those with the first-hand experience, decided to line-up in their support for China:

An Indonesian student Yessy Liana, based in Wuhan, recently sent passionate plea to her native country, which has an on-going tendency to smear everything Chinese, on behalf of its Western masters.

“Today I am in Wuhan City and I want to share the situation where I am now. We all heard about the coronavirus and for those of you who are worried or curious, hopefully this video can give light on the situation.

This is my school canteen, usually closed during winter holidays. But because of the coronavirus, the school reopened the canteen although only on the 1st floor… Because the school wants students to stay in the school and reduce the interaction with the outside

This is the street in front of the campus. Now in Wuhan, public transportation is not in operation for a while. But private vehicles can go around without a problem. You can see for yourself that… it quieter than usual.

Now we are at one of the Chaoshi (market) that is still open. You can see the stock of food and drinks in this chaoshi are plentiful, and usually those of us who stay in dormitory in Wuhan buy food and drinks here.

Now we are in campus area and in front of us is a campus hospital and it is still open.

The building in front of us is a dormitory for international students. There are basketball courts and also place to play table tennis…

Now we are at my dormitory. Next to the entrance, there is a security guard who is on duty, and he will check the temperature of all people entering and leaving the dormitory.

For parents and friends who are worried about friends or family in China, please don’t worry because the government here and the school are taking care of us…”

Similar stories are circulating all over social media, uploaded by foreign students and workers who are based in China. They speak about the determination and strength of the state, the Communist Party and the citizens.

Entire factories are ordered to produce protective gear, laboratories are working on developing vaccines and medicine, to fight this latest type of coronavirus. Hospitals are constructed literally overnight.

My friend, a doctor from Hong Kong, has no doubts why the West ignores this dedicated fight of China, against the deadly disease:

“People are accusing China, from everywhere. This means that China is really strong!”

He shared with me an image, with a comment:

“Look at this. A Danish newspaper insults China by using the coronavirus as the stars of the national flag. This has lots of feedback from the citizens of China. The Prime Minister refused to apologize because ‘there is freedom of expression in Denmark’.”

Things are getting wilder and wilder – Attacks are intensifying

Some in Hong Kong are lamenting, that the rioters have already lost their humanity and compassion. It is Chinese Lunar New Year, after all; beginning of the auspicious Year of Rat. Time when solidarity and kindness should be shown. But that is not what the rioters are paid for to do, by their Western masters.

China is now fighting successfully, but alone. Chinese people are clearly aware of the fact that their entire nation is ‘quarantined’ politically, by the West. Even during such hard times of medical emergencies, there is malicious sarcasm coming from Washington, London and Paris, never an extended hand.

Some publications, including Global Research in Canada, are not excluding a possibility that what we are witnessing could be a Western biological warfare against China.

If they are correct, chances that China will be defeated are truly slim. On 31 January, 2020, RT reported that Chinese scientists made first giant step in their epic battle:

“Scientists in China have reportedly developed an express test which can detect the 2019-nCoV novel coronavirus in under fifteen minutes, in a major breakthrough which will hopefully help stem the tide of infection.

Experts from a tech company based in Wuxi in eastern China’s Jiangsu Province, working with the National Institute for Viral Disease Control and Prevention, developed the rapid nucleic test kit in just ten days, according to the Xinhua news agency.”

China will win the battle against this malicious virus, soon, but the situation will be remembered for many years to come. It has already broken trust, and soon it will negatively influence the way this world is functioning. For years and decades, China have stood alone, smiling and with the extended hand, offering peace and friendship. Many are now wondering whether such unilateral kindness is capable of improving the world.

Text and photo by Andre Vltchek

Vltchek is a philosopher, novelist, filmmaker and investigative journalist. He has covered wars and conflicts in dozens of countries. View his books here. Watch Rwanda Gambit, his groundbreaking documentary about Rwanda and DRCongo and his film/dialogue with Noam Chomsky “On Western Terrorism”. Vltchek presently resides in East Asia and the Middle East, and continues to work around the world. He can be reached through his website and on Twitter. His Patreon.