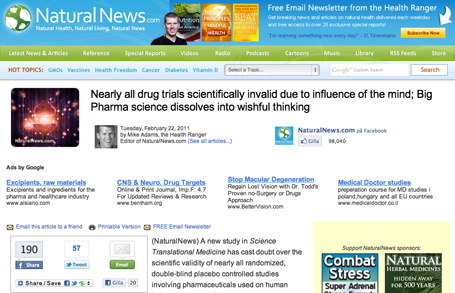 A new study in “Science Translational Medicine” has cast doubt over the scientific validity of nearly all randomized, double-blind placebo controlled studies involving pharmaceuticals used on human beings. It turns out that many pharmaceuticals only work because people expect them to, not because they have any “real” chemical effect on the body. As you’ll see here, when test subjects were told that they were not receiving painkiller medications — even though they were — the medication proved to be completely worthless.

This particular experiment involved applying heat to the legs of test subjects in order to cause pain, then adding a painkiller medication to an IV drip while assessing the subjects’ pain levels. When the painkiller drug was present, the test subjects were told about it, and just as expected their pain scores significantly dropped. But when test subjects were told the pain medication had been stopped, their pain levels returned back to the original, non-medicated levels even though the pain medication was secretly still being dripped into their IVs.

The mind of the patient, in other words, is what actually determines the “effectiveness” of the pain drug, not the chemical effect of the drug itself.

Talking to the BBC, Professor Irene Tracey from Oxford University said, “It’s phenomenal, it’s really cool. It’s one of the best analgesics we have and the brain’s influence can either vastly increase its effect, or completely remove it.”