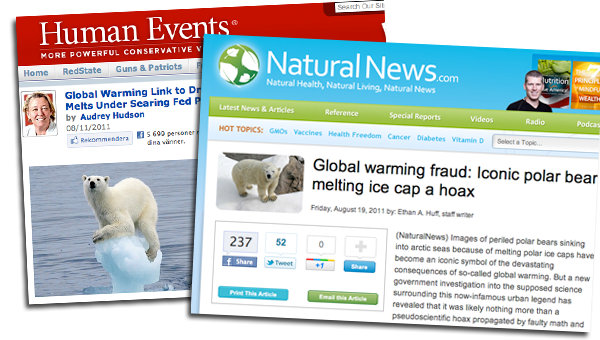 Images of periled polar bears sinking into arctic seas because of melting polar ice caps have become an iconic symbol of the devastating consequences of so-called global warming. But a new government investigation into the supposed science surrounding this now-infamous urban legend has revealed that it was likely nothing more than a pseudoscientific hoax propagated by faulty math and perfunctory observations.

According to a recent report byHuman Events, special investigators from the US government’s Interior Department (ID) have found that a scientific paper published in a 2006 issue of the journalPolar Biologyis filled with baseless assumptions about four specific polar bear deaths– and this eventually became the foundational argument for the fight against global warming. But in reality, the deaths may have had nothing to do with melting ice caps, and everything to do with a simple windstorm.

Special agents from the Interior Department’s inspector general’s office are questioning the two government scientists about the paper they wrote on drowned polar bears, suggesting mistakes were made in the math and as to how the bears actually died, and the department is eyeing another study currently underway on bear populations.

Biologist Charles Monnett, the lead scientist on the paper, was placed on administrative leave July 18. Fellow biologist Jeffrey Gleason, who also contributed to the study, is being questioned, but has not been suspended.

The disputed paper was published by the journal Polar Biology in 2006, and suggests that the “drowning-related deaths of polar bears may increase in the future if the observed trend of regression of pack ice and/or longer open-water periods continues.”

It galvanized the environmental movement that led to the bear’s controversial listing in 2008 as threatened, and it is now protected under the Endangered Species Act.

Although the four dead bears cited in the paper were observed from 1,500 feet during flights over the Beaufort Sea, and the carcasses were never recovered or examined, Gleason told investigators it is likely the creatures drowned in a sudden windstorm that produced 30-knot winds, not for lack of an ice pack.

“We never mentioned global warming in the paper,” Gleason told the investigators, according to the transcript.

“But it’s inferred,” responded investigator Eric May. “That’s why the world took it up as a global warming tangent.”

Gleason told investigators that reaction to his and Monnett’s paper was overblown and spun out of context.

Global warming is ‘nothing but a lie’, claims top meteorologist