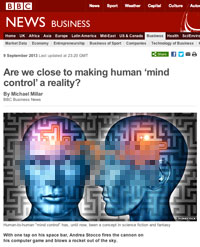 Human-to-human “mind control” has, until now, been a concept in science fiction and fantasy. With one tap on his space bar, Andrea Stocco fires the cannon on his computer game and blows a rocket out of the sky. The game itself is unremarkable – in fact it looks like a relic of the 1980s.

What is remarkable is the way it is being played because the University of Washington researcher can’t actually see it.

Boston Bomber Tsarnaev Believed He Was a Victim of Mind Control