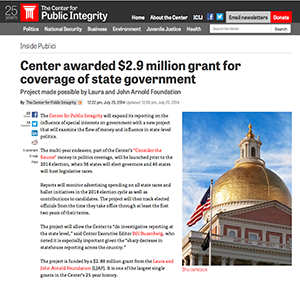 The Center for Public Integrity will expand its reporting on the influence of special interests on government with a new project that will examine the flow of money and influence in state-level politics [in the US].

Text: The Center for Public Integrity

The multi-year endeavor, part of the Center’s “Consider the Source” money in politics coverage, will be launched prior to the 2014 election, when 36 states will elect governors and 46 states will host legislative races.

Reports will monitor advertising spending on all state races and ballot initiatives in the 2014 election cycle as well as contributions to candidates. The project will then track elected officials from the time they take office through at least the first two years of their terms.

The project will allow the Center to:

…do investigative reporting at the state level,” said Center Executive Editor Bill Buzenberg, who noted it is especially important given the “sharp decrease in statehouse reporting across the country.