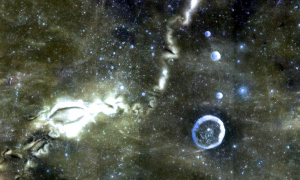 BBC. Scientists have worked out the reasons for the distorted shape of our Moon. A US team calculated the effect on the shape of the early Moon of tidal and rotational forces.

They say its own spin and the tidal tug of the Earth created a “lemon-shaped” satellite.

Lead researcher Ian Garrick-Bethell, from the University of California Santa Cruz, said this shape-shifting occurred when the Moon was mostly liquid beneath a thin outer crust of rock.

This interaction with the Earth also caused the Moon to shift slightly on its own axis.