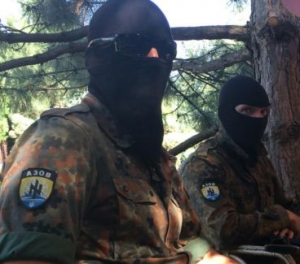 IRISH TIMES. Sitting in the shade of a broad pine tree and a pink-and-orange umbrella, two Swedes and a Canadian explain why they are ready to kill, and be killed, for the future of a free Ukraine.

They are members of the Azov Battalion, one of several units of volunteers fighting alongside Ukraine’s military and national guard against separatist rebels – allegedly backed by Moscow – who want the country’s eastern regions to join Russia.

There is really more and more evidence that significant numbers of Western volunteers support Ukrainian army in Donbas
http://ireport.cnn.com/docs/DOC-1263062
Although engagement of private armed forces in fighting on Ukrainian territory is contrary to Ukraine’s Constitution. Moreover, as these soldiers are mercenaries, it is contrary to principles of international law, too. Nevertheless Kiev constantly repeats that “the law is being broken in the interests of “Free Ukraine”. It means that soon it allows everyone to break any law, eh?