ANALYSIS. Documented in the so-called alternative media, since the summer of 2021, are thousands of anecdotal cases, many with accompanying video clips, depicting young, adult, and elderly people collapsing to the ground after a sudden heart attack. These attacks often occur within a few days of taking the experimental mRNA injections.

The Elephant in the room

Unfortunately, these common anecdotes are not reported by the authorities or the established mainstream media. The scientific press is also behind the times in their reporting, where articles are only accepted for publishing which adheres to strict criteria concerning adverse details. Furthermore, the scientific media uses jargon that is hard to understand by the general public.

This absence of available facts has led to an “Elefant in the room” situation.

Further unknowing is created by the labeling of these sudden deaths as being of “unknown cause” (idiopathic), which is delivered to the uninformed public by a professor/expert directly connected to the establishment.

There is almost total avoidance of the elephant in the room, that is to say, that these deaths occurring worldwide are a direct result of the mass C-19 injections given primarily during 2021 and even 2022.

In reporting of vaccines, deaths have slowed down – while total deaths are increasing.

The reporting system has been halted

Another anomaly is the health authorities’ processing of the reported deaths after C-19 injection, through the medical adverse reaction ledger.

When the adverse reaction register first began, many reports were incoming (roughly half from health workers and half from the relatives of the stricken) to the Swedish MPA (Medical Products Agency)

The number of reports initially grew relatively constant and reached a total in excess of 300 reported deaths after a short time, where Pfizer’s vaccine Comirnaty was clearly dominant. Conversely, the number of vaccine-related deaths has risen very slowly since the spring of 2022, and in December 2022 has reached 415. Here it is strongly suspected that the willingness to report cases of death caused by vaccine adverse reactions has greatly decreased.

Whether there has been pressure placed on health workers not to complete adverse reaction reports or if there is a denial occurring amongst those who have taken the C-19 vaccine (mostly health personnel) with mental blinders for the connection of increased death and receipt of the C-19 vaccine or even a kind of Stockholm syndrome occurring – is unknown for the time being.

Nevertheless, the greatly increasing death tolls in Sweden and many other countries is not consistent with a saturation of the number of vaccine-related deaths.

We chose to investigate if there is a correlation between the increase in total deaths in the country and the mean number of C-19 injections per capita.

Chosen as the variable on the X-axis was the number of C-19 injections administered in a country divided by the population of the country.

The number of injections per capita includes up to August 2022. The countries included are 28 European states comprising a total population in excess of 400 million residents. A small number of large nations, such as Russia, Great Britain, and Serbia are omitted.

The Y-axis shows the percent difference in excess death. The X-axis gives the country’s mean number of C-19 injections per capita and the percent increase in total deaths. 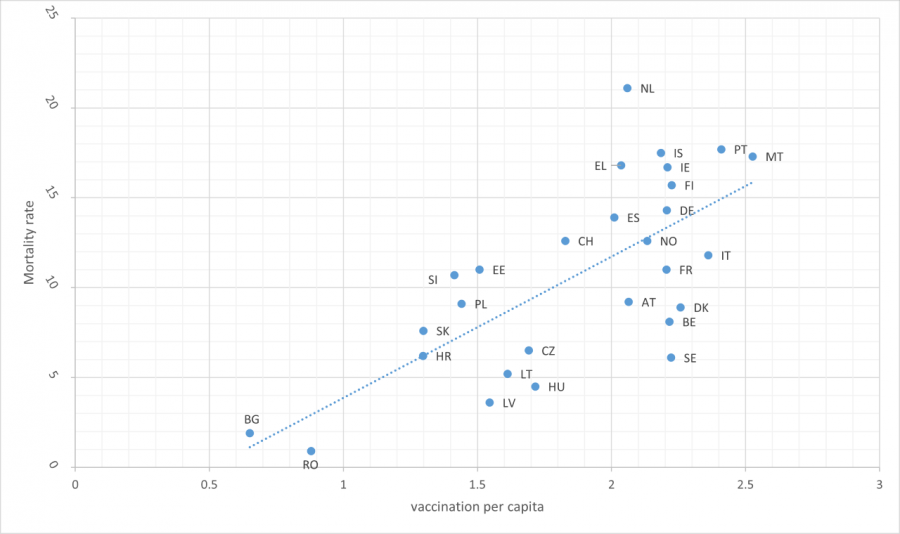 The Y-axis shows the mortality change from April 2022 to September 2022. Raw data was analyzed month by month and showed a very large variation. Summing together the data of six months for each country gave stable points on the graph. The change in the death rate obtained was a percent increase compared with a normal half-year, a mean value of the previous year’s total.

Via this numeric calculation is directly obtained the percent increase or decrease.

The countries were then plotted on the diagram. Noteworthy; no countries receiving the C-19 vaccines showed a decrease in mortality. Bulgaria and Romania stand out as having an almost normal number of deaths – these two countries had the lowest number of C-19 vaccinations per capita.

The correlation between vaccination uptake and increased mortality is very clear. Further, the data contained is from so many countries, so the correlation cannot be regarded as anecdotal.

The present statistical analysis is supported by the Italian study showing the C-19 vaccinated persons presented with a plethora of sicknesses: Dark – Field Microscopic Analysis On The Blood of 1,006 Symptomatic Persons After Anti-COVID mRNA Injections From Pfizer/BioNtech or Moderna.

Confirmation was achieved using raw data from 400 million European residents. This analytical study can easily be repeated in other regions and countries – providing honest, complete data can be attained. It would also be enlightening to compare the mortality of types of C-19 vaccines, e.g., comparing the mortality rates of a country that used a traditional vaccine with those that used mRNA-type injections.

It is also important to repeat this study when the results can contain the data from the next half-year period.

In the case of C-19 vaccinations, it has even been reported that vaccine manufacturers have used different potencies/contents in different “batches,” such that certain batches have shown themselves to be far more injurious to the recipients. The manner in which these different batches have been distributed across Europe is presently unknown.

Our conclusion of the analyzed data showing increased mortality with increased C-19 vaccine uptake leaves no room except to interpret the ongoing mass vaccination program as a great crime against mankind.

A crime against humanity that includes a vaccination hysteria fueled by the media, healthcare profession, also, and even scientific institutions. Instead of initially opening a debate about the safety and effectiveness of C-19 vaccines, the authorities have censured doctors, researchers, and anyone who warned against the dangers of the C-19 injections.

Corresponding mortality numbers for Europe approach more than 300 000 residents have died under 2022 of the experimental C-19 injections. 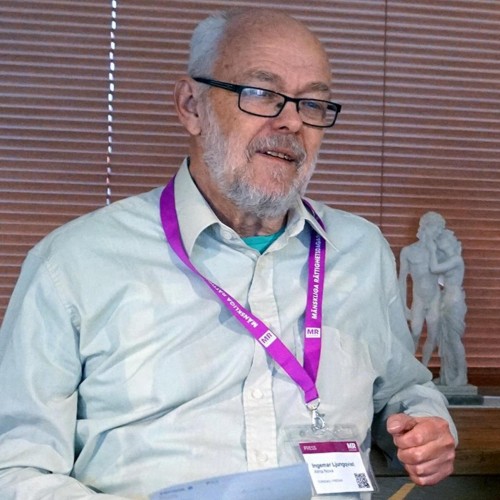