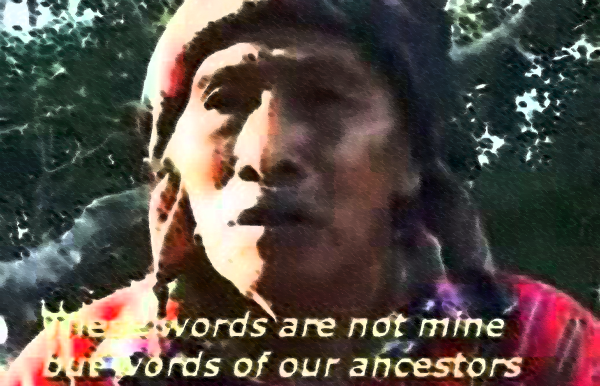 Carlos Barrios, Mayan elder and Ajq’ij is a ceremonial priest and spiritual guide of the Eagle Clan. Carlos initiated an investigation into the different Mayan calendars circulating. Carlos along with his brother Gerardo studied with many teachers and interviewed nearly 600 traditional Mayan elders to widen their scope of knowledge.

Permission to re-publish this article was granted by Ralph Squire president of SERI Worldwide, HQ in California.

Carlos found out quickly there were several conflicting interpretations of Mayan hieroglyphs, petroglyphs, Sacred Books of ‘Chilam Balam’ and various ancient text. Carlos found some strong words for those who may have contributed to the confusion:

“Anthropologists visit the temple sites and read the inscriptions and make up stories about the Maya, but they do not read the signs correctly. It’s just their imagination. Other people write about prophecy in the name of the Maya. They say that the world will end in December 2012. The Mayan elders are angry with this. The world will not end. It will be transformed.”

“Humanity will continue, but in a different way. Material structures will change. From this we will have the opportunity to be more human. We are living in the most important era of the Mayan calendars and prophecies. All the prophecies of the world, all the traditions are converging now. There is no time for games. The spiritual ideal of this era is action.”

“The indigenous have the calendars and know how to accurately interpret it — not others. The Mayan Calendars comprehension of time, seasons, and cycles has proven itself to be vast and sophisticated. The Maya understand 17 different calendars such as the Tzolk’in or Cholq’ij, some of them charting time accurately over a span of more than ten million years.”

“All was predicted by the mathematical cycles of the Mayan calendars. — It will change –everything will change. Mayan Day-keepers view the Dec. 21, 2012 date as a rebirth, the start of the World of the Fifth Sun. It will be the start of a new era resulting from and signified by the solar meridian crossing the galactic equator and the Earth aligning itself with the center of the galaxy.”

At sunrise on December 21, 2012 for the first time in 26,000 years the Sun rises to conjunct the intersection of the Milky Way and the plane of the ecliptic. This cosmic cross is considered to be an embodiment of the Sacred Tree, The Tree of Life, a tree remembered in all the world’s spiritual traditions.

Some observers say this alignment with the heart of the galaxy in 2012 will open a channel for cosmic energy to flow through the Earth, cleansing it and all that dwells upon it, raising all to a higher level of vibration.

“This process has already begun. Change is accelerating now and it will continue to accelerate.”

If the people of the Earth” can get to this 2012 date in good shape without having destroyed too much of the Earth, we will rise to a new, higher level. But to get there we must transform enormously powerful forces that seek to block the way.”

Many outside people writing about the Mayan calendar sensationalize this date, but they do not know. The ones who know are the indigenous elders who are entrusted with keeping the tradition.

“The economy now is a fiction. The first five-year stretch of transition from August 1987 to August 1992 was the beginning of the destruction of the material world. We have progressed ten years deeper into the transition phase by now, and many of the so-called sources of financial stability are in fact hollow. The banks are weak. This is a delicate moment for them. They could crash globally, if we don’t pay attention. Now, people are paying attention.”

The North and South Poles are both breaking up. The level of the water in the oceans is going to rise. But at the same time land in the ocean, especially near Cuba, is also going to rise. Carlos tells a story about the most recent Mayan New Year ceremonies in Guatemala. He said that one respected Mam elder, who lives all year in a solitary mountain cave, journeyed to Chichicastenango to speak with the people at the ceremony. The elder delivered a simple, direct message. He called for human beings to come together in support of life and light.

“Right now each person and group is going his or her own way. The elder of the mountains said there is hope if the people of the light can come together and unite in some way. We live in a world of polarity — day and night, man and woman, positive and negative. Light and darkness need each other. They are a balance.”

“Just now the dark side is very strong, and very clear about what they want. They have their vision and their priorities clearly held, and also their hierarchy. They are working in many ways so that we will be unable to connect with the spiral Fifth World in 2012.”

“On the light side everyone thinks they are the most important, that their own understandings, or their group’s understandings, are the key. There’s a diversity of cultures and opinions, so there is competition, diffusion, and no single focus.”

Carlos believes the dark side works to block unity through denial and materialism. It also works to destroy those who are working with the light to get the Earth to a higher level. They like the energy of the old, declining Fourth World, the materialism. They do not want it to change. They do not want unity. They want to stay at this level, and are afraid of the next level.

The dark power of the declining Fourth World cannot be destroyed or overpowered. It’s too strong and clear for that, and that is the wrong strategy. The dark can only be transformed when confronted with simplicity and open-heartedness. This is what leads to unity, a key concept for the World of the Fifth Sun.

Era of the Fifth Sun

Carlos said the emerging era of the Fifth Sun will call attention to a much-overlooked element. Whereas the four traditional elements of Earth, Air, Fire and Water have dominated various epochs in the past, there will be a fifth element to reckon with in the time of the Fifth Sun — that element is ‘ETHER’.

The dictionary defines Ether as a “hypothetical substance supposed to occupy all space, postulated to account for the propagation of electromagnetic radiation through space.” Perhaps it could be defined as the “space between space”. I would suggest it could be manifest as the alignment of charged particles from our solar system (Sun), and our galaxy (Milky Way) surge. The Ether element represents spiritual energy.

“The element of the Fifth Sun is celestial. Within the context of Ether there can be a joining of the polarities. No more darkness or light in the people, but an uplifted unity. But right now the realm of darkness is not interested in this. They are organized to block it. They seek to unbalance the Earth and its environment so we will be unready for the alignment in 2012.”

“We need to work together for peace, and balance with the other side. We need to take care of the Earth that feeds and shelters us. We need to put our entire mind and heart into pursuing unity and unity now, to confront the other side and preserve life.”

“We are disturbed — we can’t play anymore. Our planet can be renewed or ravaged. Now is the time to awaken and take action. Everyone is needed. You are not here for no reason. Everyone who is here now has an important purpose. This is a hard but a special time. We have the opportunity for growth, but we must be ready for this moment in history.”

Carlos says: “The prophesied changes are going to happen, but our attitude and actions determine how harsh or mild they are. We need to act, to make changes, and to elect people to represent us who understand and who will take political action to respect the Earth.”

“Meditation and spiritual practice are good, but also action. It’s very important to be clear about who you are, and also about your relation to the Earth. Develop yourself according to your own tradition and the call of your heart. But remember to respect differences, and strive for unity. Eat wisely — a lot of food is corrupt in either subtle or gross ways. Pay attention to what you are taking into your body. Learn to preserve food, and to conserve energy. Learn some good breathing techniques, so you have mastery of your breath. Be clear. Follow a tradition with great roots. It is not important what tradition, your heart will tell you, but it must have great roots.”

“We live in a world of energy. An important task at this time is to learn to sense or see the energy of everyone and everything — people, plants, animals. This becomes increasingly important as we draw close to the World of the Fifth Sun, for it is associated with the element ‘ether’ — the realm where energy lives and weaves. Go to the sacred places of the Earth to pray for peace, and have respect for the Earth which gives us our food, clothing, and shelter. We need to reactivate the energy of these sacred places. That is our work.”

“One simple but effective prayer technique is to light white or baby-blue colored candles. Think of a moment in peace. Speak your intention to the flame and send the light of it on to the leaders who have the power to make war or peace.”

Carlos reminds us this is a crucially important moment for humanity and for Earth. Each person is important. He said the elders have opened the doors so that other races can come to the Mayan world to receive the tradition. “The Maya have long appreciated and respected that there are other colors, other races, and other spiritual systems. They know that the destiny of the Mayan world is related to the destiny of the whole world.”

“The greatest wisdom is in simplicity. Love, respect, tolerance, sharing, gratitude, forgiveness. It’s not complex or elaborate. The real knowledge is free. It’s encoded in your DNA. All you need is within you. Great teachers have said that from the beginning. Find your heart, and you will find your way.”

SERI-World Wide is a unique organization in that its purpose is intended to be a sharing of information and sources of information related to subtle energies of all kinds.

It is our vision to create a community of people and organizations which can exchange articles and information through a web site which is an ongoing online journal, designed to encourage research and support dialogue in the various areas of subtle energy.

We will post observational and research papers, theoretical papers, literature reviews, reports, and articles of general interest to our readers, through Focus Areas.

Nothing special will happen December 21, 2012 except crossing the Galactic Equator

New findings: Mayan calendar continues after 2012 – The World will go on

I have been intrigued by the dizzying turmoil of world events; natural, financial, and societal, and created this video to explore both the causes and solutions.

It is titled:
‘2012 Mayan Calendar – A Schedule to Enlightened Consciousness’ and is in two parts: