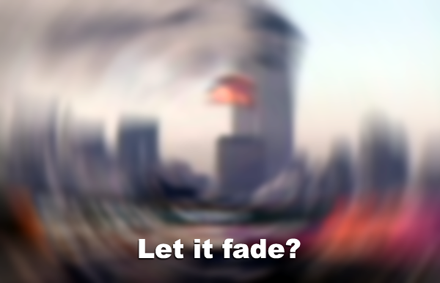 We recently passed the 10th Anniversary of September 11th. A massive tragedy like 9/11 that impacts every corner of society can create an opportunity for inner reflection and clarity when it is made relevant to the individual’s awakening, so why does this rarely happen?

Every year the violent visuals of this black day resurface to bring us face to face with a recurring pain that is still intolerable and paralyzing to most.

We each recall the stark images of planes flying into sky scrapers; the heroism, the villainy, the suffering, the imagination slipping into what it could have been like for the senses to experience the fire, smoke, and collapsing rubble. Every society has versions of its own 9/11 and Ground Zero.

Tragedy’s Potential to Go Either Way

The loss and devastation merged the nation’s voices and those of the world’s into a chorus of sympathy and unity before the fallout from anger and revenge started to kick in and spread.

Regardless of your position on what happened and why, 9/11 gave us an illustration of how one act of mass victimization and violence can create both the seeds of unity and the worst kind of destructive cycle. Moreover, it showed how past events kept alive so intensely often ignite into the most potent and definitive forces available.

In the last 10 years, 9/11 has indisputably governed our perception of world affairs; more often with a negative frame of reference, and it has redefined our cultural belief system. It has reshaped world events more than any other moment in history since. But it has gotten personal too.

Are We Stuck in a Story?

On the personal side, I believe that if such tragic forces are not converted into platforms for conscious awakening and compassion, they will soon become a heavyweight distraction.

In their book, “Spontaneous Evolution,” American scientist, Bruce Lipton, and political scientist, Steve Bareman, discuss the limitations and sabotaging influences of the collective subconscious experience, “We are storymaking creatures…in order to make meaning of the world, we create stories”— They raise questions about what we are left with when societies have to drop them.

Sometimes, it’s not easy for victims of violence to answer this question. The urge is to instead develop a story that creates a self-serving struggle between good and evil, right and wrong, hero and villain. Yet Lipton and Bareman and others like Eckhart Tolle remind us that we are meant to move beyond our stories. Why?

If a person is to transform and awaken to their gifts, then it becomes nearly impossible to do so when still clinging to a recurring cycle of past hurts and injustices. To drop the collective story is to aim for a more fundamental acceptance that all beings are interrelated in the web of life, and that while bad things happen and stories are there to help us get through the skids, ultimately they must be dropped if we don’t want them to rule our subconscious.

It’s not to say that adding layers to the trauma doesn’t benefit a certain kind of energy, but when it gets in the way of identifying with a positive meaning in a big-picture context, then it can be hypnotizing to allow cultural belief to dominate our lives.

“We often find people who have a wound, or an affliction, or problem. And their entire lives become about this problem and then to let go of that problem they would lose all of the meaning in their lives. This gets played out in cultures…Each time one side does something bad to the other side, that enhances the story and it builds the story one more storey high.”

Dropping the Story to Celebrate Life

After 9/11, “national security” arguably became the dominant political and cultural story in the US and many parts of the world, and the values of strength and valor against terror (as well as their ugly shadows) took center stage.

As we still try to figure out the good and the bad players in all the stories that occupy our lives, depending on where we stand and with whom, it’s up to each of us to not lose sight of the liberation that comes about when we move past the sting from past wounds, be they personal or cultural.

If you still think that it’s worthwhile to cling to the shared experience of those violent images from 9/11, consider the impact of this decision on the fragile inner world that has to recycle the same painful story each time. And consider Lipton and Bare’s rational notion that it empowers our conscious capacity to participate in the world when beliefs that are limiting are reprogrammed.

After a decade, the wars and increased terror make a more cooperative reprogramming of story that celebrates life rather than blames it in our interests. This way the shining coat of armor that is there to preserve the ego from the fear of violence can be replaced with a radiant mirror reflection of a responsible vibrant and more complete being; free to avoid storybook distractions that come and go in life.

The Grand Convergence: The New Science of the Body-Mind-Spirit Trinity – Aug 15, 2015