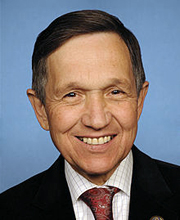 Washington Times: Dennis Kucinich has introduced a bill that would require cell phones to warn consumers how much radiation is coming from their phones, saying that until science can disprove a link to cancer, the public should be told more information.

His bill, the Cell Phone Right to Know Act, would also demand a study of cell phones and health, looking at a broad array of signals that smart phones now send out, ranging from the phone to bluetooth to WiFi.

Mr. Kucinich said the World Health Organization last year said cell phones were “possibly carcinogenic to humans,” which the congressman said placed them on the same footing as lead and mercury.