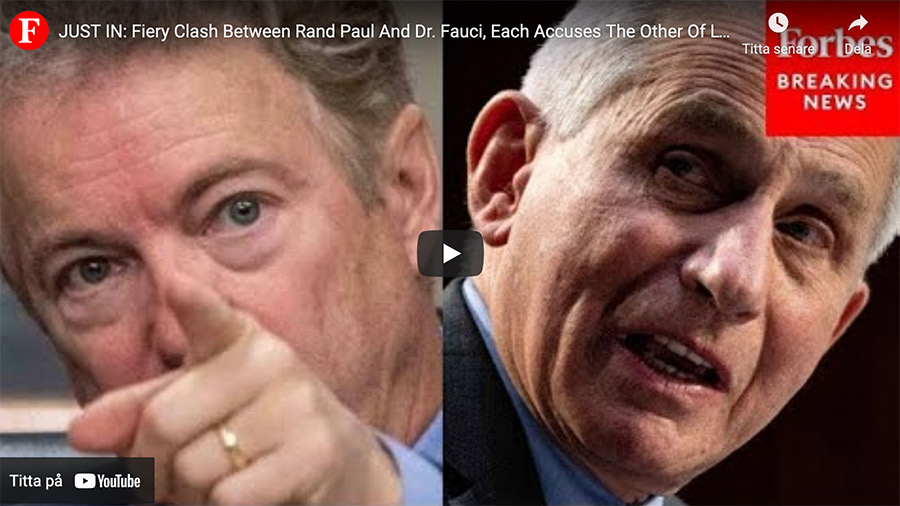 The ‘Smoking Gun’ That Could Put Fauci Behind Bars

In an August 31, 2021, substack article,1 Paul Thacker, an investigative reporter and former investigator with the U.S. Senate, reviews evidence he claims shows Dr. Anthony Fauci lied to Congress, an offense punishable by up to five years in prison, provided the false statements are materially relevant and knowingly false.

“A new investigative documentary by the U.K.’s Channel 42 detailed some of the strongest evidence to date that the COVID19 pandemic may have started from a lab leak in Wuhan, China,” Thacker writes.3

“At the very least, the documentary’s interviews with experts and review of documents made explicit how China has misled the world about its research with dangerous pathogens …

The documentary clarified one other point: Anthony Fauci lied before Congress and the American public when he claimed during a congressional hearing that he has not funded gain-of-function research conducted by the Wuhan Institute of Virology …

President Biden has campaigned on honesty and decency. The question now for President Biden is, ‘What will you do with Fauci now that he has broken the law and violated the public trust by lying before Congress?’”

In what appears to be an attempt to extricate himself from blame for the COVID pandemic, Fauci — director of the National Institute for Allergy and Infectious Diseases (NIAID), an arm of the National Institutes for Health (NIH), since 1986 — denied ever having funded gain-of-function research at the WIV or elsewhere when questioned by members of the Senate Health, Education, Labor, and Pensions Committee in May 2021.4

The term ‘gain-of-function’ is generally used to refer to changes resulting in the acquisition of new, or an enhancement of existing, biological phenotypes. ~ National Science Advisory Board for Biosecurity.

According to Thacker, the evidence clearly refutes this. One “smoking gun” is a research article written by WIV scientists titled “Discovery of a Rich Gene Pool of Bat SARS-Related Coronaviruses Provides New Insights Into the Origin of SARS Coronavirus.”5 This research was funded by the NIH and meets the Department of Health and Human Services’ definition of gain-of-function research.6,7

The Channel 4 documentary addressed this paper. When asked whether the NIH ever funded gain-of-function research at the WIV, David Relman, a research physician at Stanford University, replies, “Yes. Indirectly, but yes. How do we know? The paper says, right on the front page, ‘Supported by NIAID, NIH.’” The clip featuring Relman is included below.

This is precisely what gain-of-function research is all about. According to a 2016 report9 from the National Science Advisory Board for Biosecurity, “The term ‘gain-of-function’ is generally used to refer to changes resulting in the acquisition of new, or an enhancement of existing, biological phenotypes.”

Fauci now wants to adopt a far narrower definition of gain-of-function research that takes into account the supposed intent behind the research, but that really doesn’t make sense. Just because you don’t set out with intent to harm doesn’t mean your creation can’t cause harm or might inadvertently cause harm.

US Funding of Gain-of-Function Research Was Well-Established

According to Thacker, “Fauci certainly knew that the WIV he was helping to fund conducted gain-of-function studies, because it has been common knowledge.”10 For example, a year before Fauci was queried by Congress, Newsweek reported that:11

“In 2019, with the backing of NIAID, the National Institutes of Health committed $3.7 million over six years for research that included some gain-of-function work. The program followed another $3.7 million, 5-year project for collecting and studying bat coronaviruses, which ended in 2019, bringing the total to $7.4 million …

The NIH research consisted of two parts. The first part12 began in 2014 and involved surveillance of bat coronaviruses … The program funded Shi Zheng-Li, a virologist at the Wuhan lab … to investigate and catalogue bat coronaviruses in the wild. This part of the project was completed in 2019.

A second phase13 of the project, beginning that year, included … gain-of-function research for the purpose of understanding how bat coronaviruses could mutate to attack humans. The project was run by EcoHealth Alliance … under the direction of President Peter Daszak … NIH canceled the project … April 24 [2020] …

Many scientists have criticized gain of function research, which involves manipulating viruses in the lab to explore their potential for infecting humans, because it creates a risk of starting a pandemic from accidental release.”

Around that same time, former Acting Director of the CIA Michael Morell told Politico14 that “if the virus leaked from a Wuhan lab, the U.S. would shoulder some of the blame since it funded research at that lab through government grants from 2014 to 2019.”

Mid-January 2021, the U.S. State Department published a fact sheet accusing the Chinese government of being obsessively secretive about gain-of-function research at the WIV, and that it was collaborating with the Chinese military on secret projects.

The fact sheet has since been removed from the State Department’s website, but was reported by a number of outlets at the time. Among them, Life Site News, which wrote:15

“In a ‘Fact Sheet’ posted online … the Department of State (DOS) presented three distinct elements about the origin of the virus, which ‘deserve greater scrutiny’ … The first of the three issues needing further investigation, was the outbreak of illness inside the Wuhan Institute of Virology (WIV).

The DOS revealed it had ‘reason to believe’ that ‘several researchers inside the WIV became sick in autumn 2019, before the first identified case of the outbreak, with symptoms consistent with both COVID-19 and common seasonal illnesses’ …

Additionally, the DOS noted that researchers in the WIV had been performing experiments on ‘RaTG13, the bat coronavirus identified by the WIV in January 2020 as its closest sample to SARS-CoV-2 (96.2% similar)’ since at least ‘2016.’

The laboratory also ‘has a published record of conducting ‘gain-of-function’ research to engineer chimeric viruses.’ Such research, gain-of-function research, is a kind which ‘improves the ability of a pathogen to cause disease.’”

March 6, 2021, the editorial board of The Washington Post published an article16 calling for an independent investigation into the origin of SARS-CoV-2. In that article, the board pointed out that:

“… a senior researcher at the Wuhan Institute of Virology, Shi Zhengli, was working on ‘gain-of-function’ experiments, which involve modifying viral genomes to give them new properties, including the ability to infect lung cells of laboratory mice that had been genetically modified to respond as human respiratory cells would.”

The board also noted that Shi was “working with bat coronaviruses that were genetically very similar to the one that caused the pandemic.” A few months later, in a June 22, 2021, essay,17 professor Jeffrey Sachs, head of The Lancet’s commission tasked with investigating COVID’s origin, also described how the NIAID has funded gain-of-function research at the WIV:

“It is in fact common knowledge in the U.S. scientific community that NIH has indeed supported genetic recombinant research on SARS-like viruses that many scientists describe as GOFROC [gain-of-function research of concern].

The peer-reviewed scientific literature reports the results of such NIH-supported recombinant genetic research on SARS-like viruses. More specifically, it is clear that the NIH co-funded research at the WIV that deserves scrutiny under the hypothesis of a laboratory-related release of the virus.”

Someone who has taken a particular interest in Fauci’s potential role in this pandemic is Dr. Peter Breggin, a Harvard-trained psychiatrist and former consultant for the National Institute of Mental Health. In October 2020, he published the report18 “Dr. Fauci’s COVID-19 Treachery,” detailing Fauci’s ties to the Chinese Communist Party (CCP) and its military.

Breggin is convinced Fauci “has been the major force” behind research activities that enabled the CCP to manufacture lethal SARS coronaviruses, which in turn led to the release — whether accidental or not — of SARS-CoV-2 from the WIV.

He claims Fauci has helped the CCP obtain “valuable U.S. patents,” and that he, in collaboration with the CCP and the WHO, initially suppressed the truth about the origins and dangers of the pandemic, thereby enabling the spread of the virus from China to the rest of the world.

Fauci has, and continues to, shield the CCP and himself, Breggin says, by “denying the origin of SARS-CoV-2” and “delaying and thwarting worldwide attempts to deal rationally with the pandemic.”

In the executive summary of the report, Breggin documents 15 questionable activities that Fauci has been engaged in, starting with the fact that he funded dangerous gain-of-function research on bat coronaviruses, both by individual Chinese researchers and the WIV in collaboration with American researchers. This research, Breggin says, allowed the CCP and its military to create their own bioweapons, including SARS-CoV-2.

Will Fauci Be Held Accountable?

According to Thacker, “it’s obvious” Fauci “broke the law and misled Congress.” He adds:19

“This is not my personal opinion; I was required to know and enforce the relevant provisions of the law during the three years I ran investigations in the Senate. On two occasions I had to consult with Senate Legal Counsel and then warn people about lying to Congress …

Fauci lied while testifying before Congress. Fauci lied to the American people. Several lines of evidence make this clear. But catching Fauci lying and breaking the law does little good, because the Department of Justice prosecutes people for lying to Congress, and the Department of Justice is run … by the Biden administration. So what is President Biden going to do about this?”

During an appearance on the Hannity Show, July 20, 2021, U.S. Sen. Rand Paul — who has grilled Fauci about his research funding in two separate hearings this year — announced he would indeed ask the DOJ for a criminal referral.20

Paul specifically asked the DOJ to investigate whether Fauci violated 18 U.S. Code § 100121 — which makes it a federal crime to make “any materially false, fictitious or fraudulent statement or representation” as part of “any investigation or review” conducted by Congress — or any other statute. Time will tell if it amounts to anything.

Gain-of-Function Research Is the Real Threat

Regardless of what happens to Fauci, at the end of the day, the key issue that needs to be addressed is whether we should allow research that involves making pathogens more dangerous to humans at all, regardless of what the intent behind it might be, or the specific technology used.

Lab leaks have occurred on multiple occasions, so it’s really only a matter of time before something far more devastating than SARS-CoV-2 gets out. World leaders need to realize that funding gain-of-function research is the real threat here, and take action accordingly to forestall another pandemic. As long as researchers are allowed to mutate and create synthetic pathogens, they’re creating the very risk they claim they’re trying to prevent.

“New documents have been released detailing U.S.-funded research on various types of coronaviruses at the Wuhan Institute of Virology (WIV) in Wuhan, China, where the first outbreak of the CCP (Chinese Communist Party) virus occurred.”

I’ll eat my hat and your hats too if he’s put in jail.

The wicked protect their own! Just like Donald Trump’s false promises, Anthony Fauchi`s alleged punishment is a fake hope in order to make the people passive and not to act themselves, but just to wait for the promised, false justice.

The good people should also protect their own!!!

Guest writer
NewsVoice welcomes knowledgeable guest writers who wish to share facts, information, and opinions that will enrich our content and the truth-seeking community.